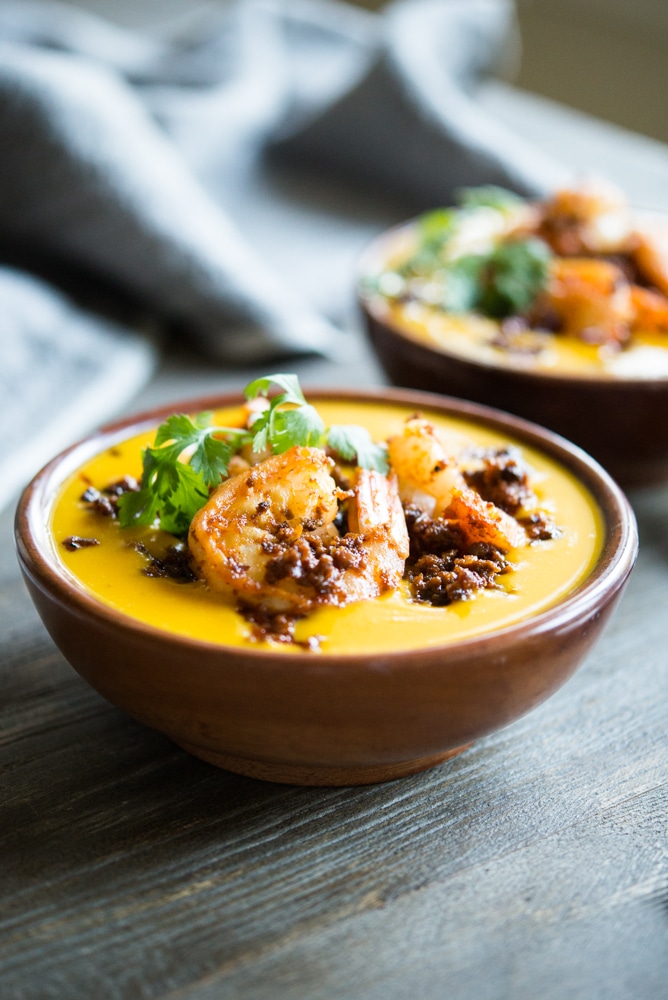 This Paleo chorizo and shrimp kabocha squash soup is creamy, filling, warming, and incredibly flavorful. Read about how you can make this festive dish for the whole family! I also share a short story about a lost little creature named Tom. 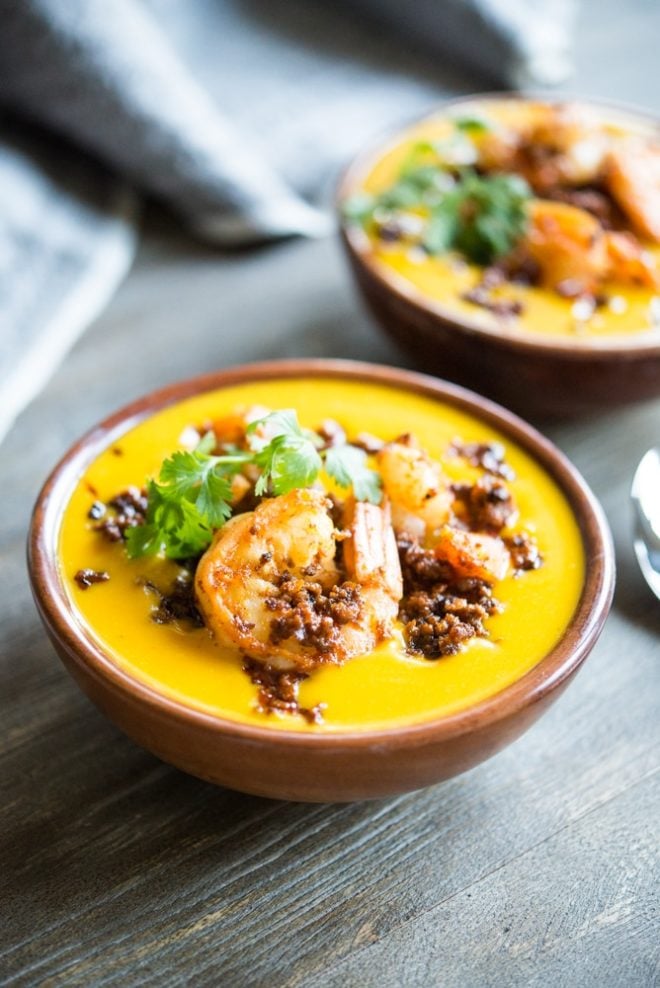 I’m pretty sure I brought a wild animal into my house this past week. It all started while I was out walking Gus! We were making our normal stroll through the neighborhood when we passed a driveway a few houses down and ran into the CUTEST little furry woodland creature. At first, I thought he was a mouse (it was not a mouse) and was immediately impressed by how CHILL he reacted to the 100+ pound giant white dog sniffing at him! He just went about his business of nibbling on leaves while Gus and I took in the scene. He didn’t look scared or intimidated in the least! Gus and I went on with our walk and I kept thinking about that cute little guy. A few workday hours went by and he was still on my mind. I was thinking, “there’s NO WAY that’s a wild animal …it was so comfortable around us, it must be someone’s pet!” That thought ate at me until I couldn’t take it anymore …I needed to go rescue that lost little pet. I went back out in the dropping temperatures and he was *exactly* where I found him the first time: chilling in the driveway, nibbling on leaves. My husband graciously found me a nice big box and pair of leather gloves for “Operation Rescue Random Rodent.” I scooped up the little muffin man (who couldn’t have cared less) and took him home. I placed a shallow dish of water, old towel (for snuggling), and a couple carrots in his box. I also named him Tom. After eventually warming up, Tom started nibbling on the carrots and relaxed! Though Tom was looking better, I still had no clue if I’d brought home an average mouse or exotic rodent. I asked on Snapchat and after a bunch of suggestions were submitted, we settled on “vole.”

Apparently, voles aren’t kept as pets …so yes. YES, Tom was a wild animal. OH WELL. He was warm, comfy, fed, hydrated, dry (it started pouring that day), and away from the prying eyes of our neighborhood hawks.

I did a good amount of research on voles and discovered that while they ARE very mild mannered, they don’t have a very long lifespan (12 months at most) which is why they make for abnormal pets. Adding to that, my husband was pretty convinced that little Tom had found his way into some kind of yard poison. Though fed and hydrated, he was showing signs of the end being near. After deciding to call a wild animal rescue center to help us care for Tom, we found that the sweet little vole angels had peacefully welcomed him home.

It broke my heart but I’m so glad to know that his last few days were extra comfortable. 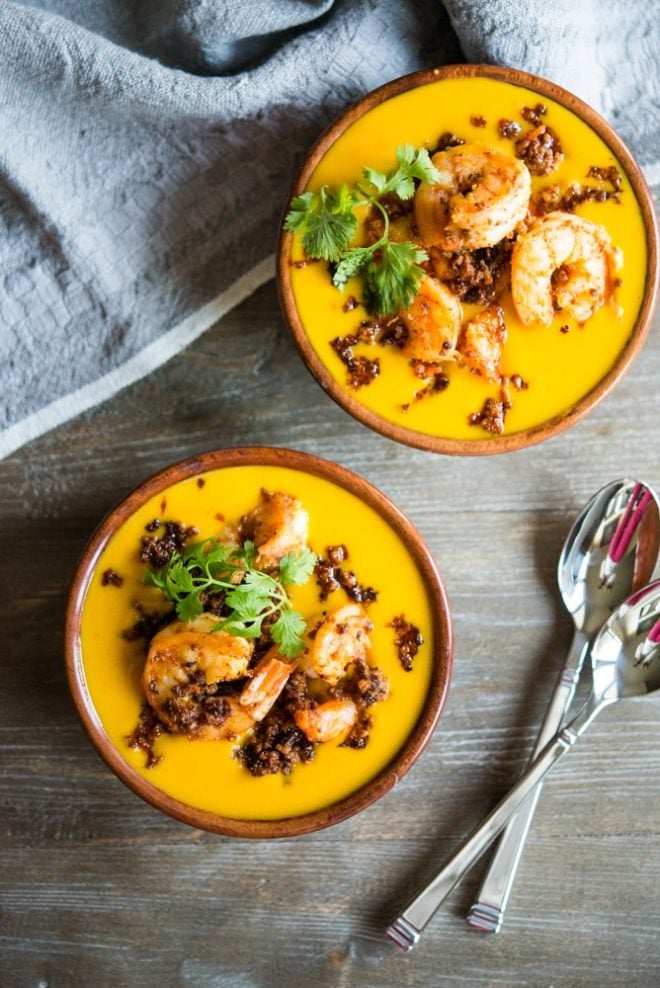 Because nothing says tasty soup like the story of a lost/rescued wild rodent! 😉 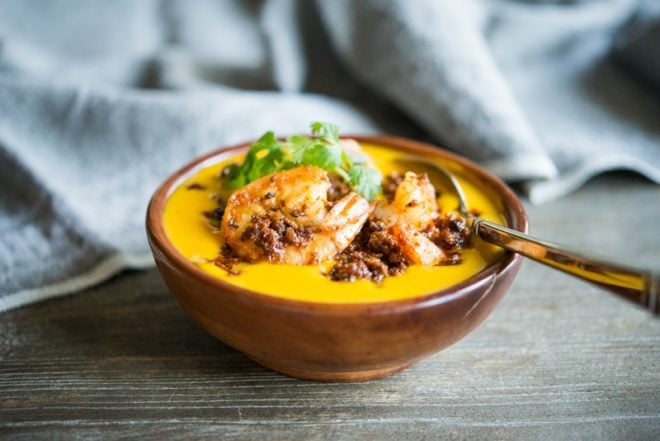 Seriously, though – this kabocha squash soup is amazing. I brought a kabocha squash home with me one day when they were on sale at Whole Foods and was determined write a tasty recipe. Craving something creamy, warm, and a little spicy, this soup hit the spot! I love the combination of the crispy chorizo with the shrimp. The punch of lime to the kabocha squash soup really helps brighten the flavors even more! 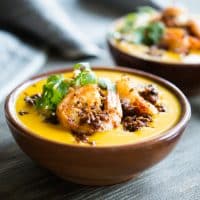 By: Cassy
No ratings yet
Print Email
Prep Time: 1 hr
Servings: 4 to 6 servings 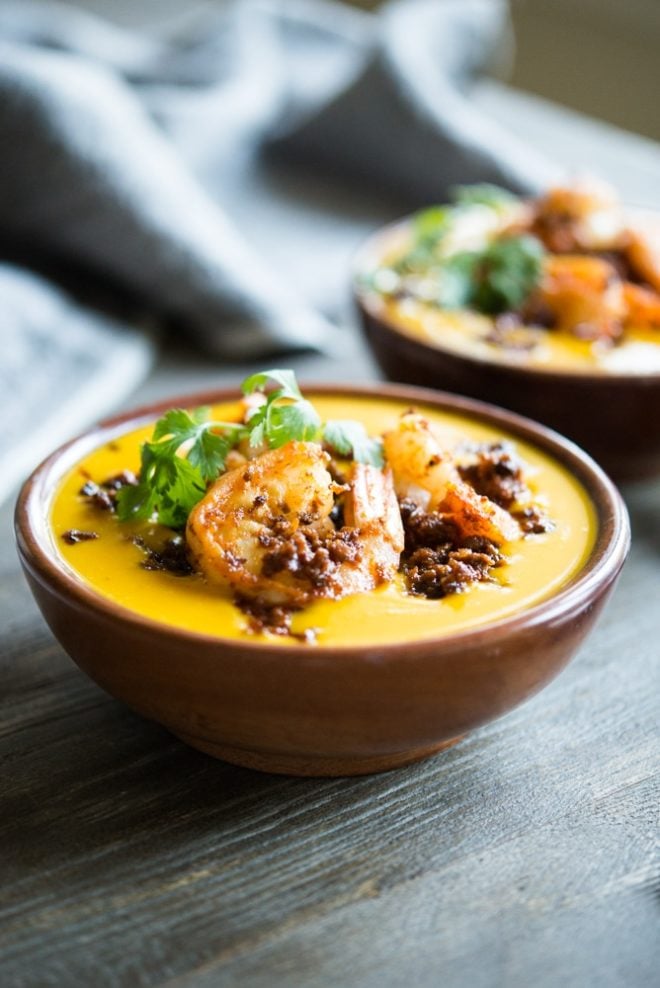