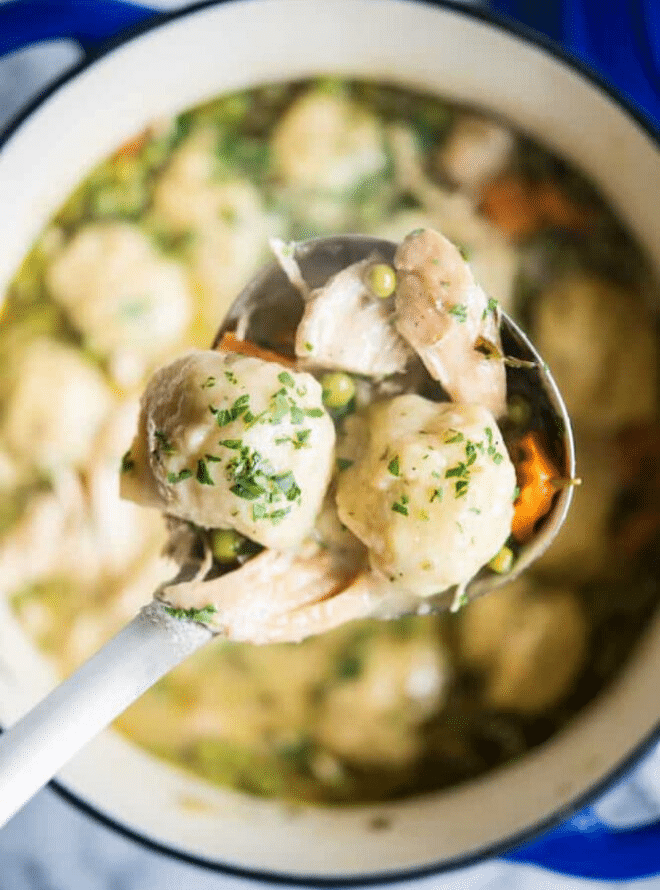 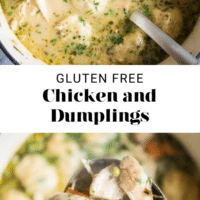 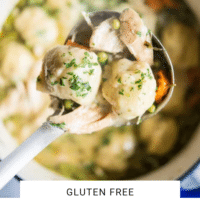 This recipe for gluten free chicken and dumplings is the perfect thing to warm you up on a cold winter’s night! Hearty chicken soup is topped off with perfectly fluffy dumplings for a meal the whole family will love.

Gluten. Free. Chicken. And. Dumplings. Need I say more? I don’t think there’s any food more comforting than chicken and dumplings (except for maybe this chicken pot pie). Fun fact: I had never actually eaten chicken and dumplings growing up. It wasn’t until later in life, after going gluten free, that I wound up at a dinner party where it was the main dish. Sitting there looking at everyone’s steaming bowls and hearing them exclaim about how good it was, I knew I needed to experiment with my own gluten free chicken and dumplings ASAP.

Let’s just say it was a revelation. I mean, why aren’t we putting dumplings in ALL of our soups already?! My first attempt at gluten free chicken and dumplings involved making the dumplings out of Gluten Free Bisquick, but was slowly evolved into the scratch-made dumplings you see here. I know dumpling making can seem a little intimidating at first, but it really isn’t!

How to Make Gluten Free Chicken and Dumplings

First things first, you’ll make the soup, which is best-described as a cross between traditional chicken soup and a chicken pot pie filling. While you can change up the veggies to your liking, we start by searing chicken then sauteing onion, garlic, carrots, and celery in a little butter. From there, you’ll make a quick roux with gluten free flour blend, then whisk in chicken broth (the higher quality the better it will taste!), cream, peas, and fresh herbs.

More of our Favorite Chicken Recipes

Once the soup is simmering, it’s dumpling time! You’ll mix together a simple biscuit dough, then drop the batter into the dumplings by the spoonful. Finally, you’ll cover the pot and simmer the dumplings for about 15-20 minutes, until the dumplings have fully cooked through and expanded in size. Then, you just sprinkle on a little fresh parsley and you’re ready for show time!

We hope you enjoy this recipe for gluten-free chicken and dumplings! 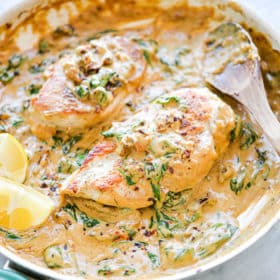 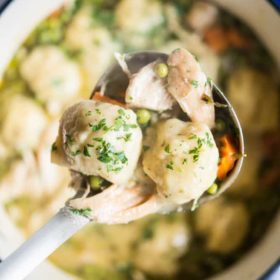