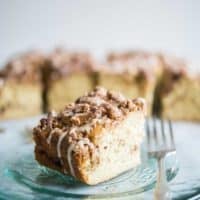 This coffee cake has all the flavor of cinnamon rolls without the work!

For the Cake
For the crumble
For the icing (optional)

For a blueberry lemon version: omit the cinnamon sugar layer from the recipe and stir in 2 tablespoons lemon juice, 1 tablespoon lemon zest, and 1 1/4 cups of blueberries to the batter. For the icing, replace the heavy cream with lemon juice.