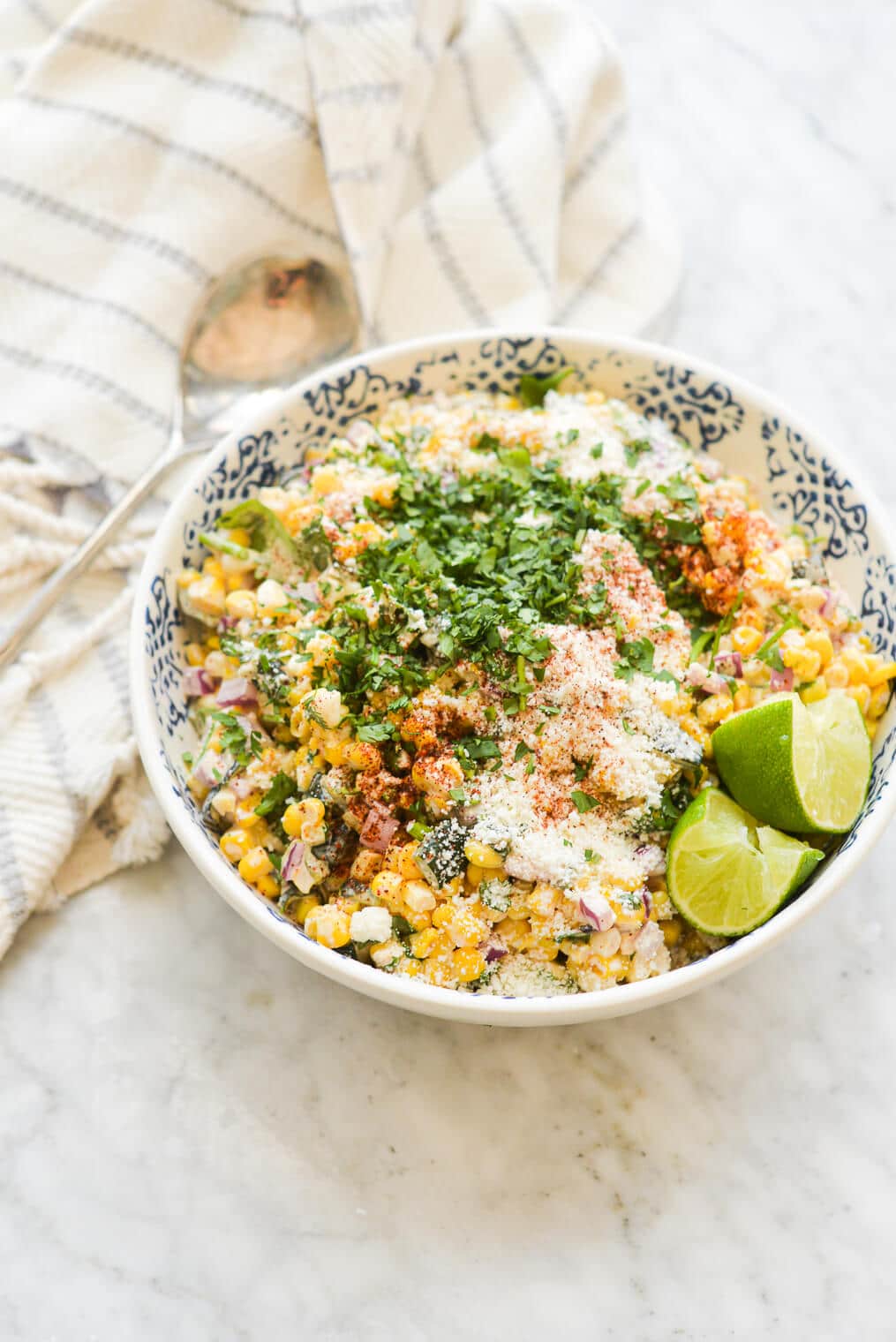 Made with fresh corn on the cob, mayo, sour cream, poblanos, chili powder, and cotija cheese (plus a few other ingredients), this Mexican street corn salad is such a yummy side dish to serve at your next gathering!

This Mexican street corn salad is really delicious, y’all. With mayo, sour cream, chili powder, lime juice, and cotija cheese (plus a couple other ingredients!), it’s really similar to elote (a popular Mexican street food made with fresh corn on the cob smothered in a creamy sauce and sprinkled with cheese and chili powder).

Served alongside other Mexican-inspired dishes that you love or a big, juicy, grilled hamburger, this Mexican street corn salad is a side dish that’ll truly be enjoyed by all!

This corn salad includes all of the classic Mexican street corn ingredients but is made in scoopable, salad form. Here’s everything you’ll need:

Is cotija cheese the same as queso fresco?

What cheese is closest to cotija?

Good question! If you can’t find cotija cheese, look for queso fresco, feta, or parmesan. While none of these are a perfect replacement, they’ll all get the job done!

How do you make Spicy Mexican Street Corn Salad?

Here’s a step-by-step guide on how to make Mexican street corn salad:

Note: this isn’t necessarily a *spicy* corn salad! If you want to increase the spice, though, you can use chipotle chili powder instead of regular, mild chili powder or by adding a jalapeno or serrano pepper to the salad. 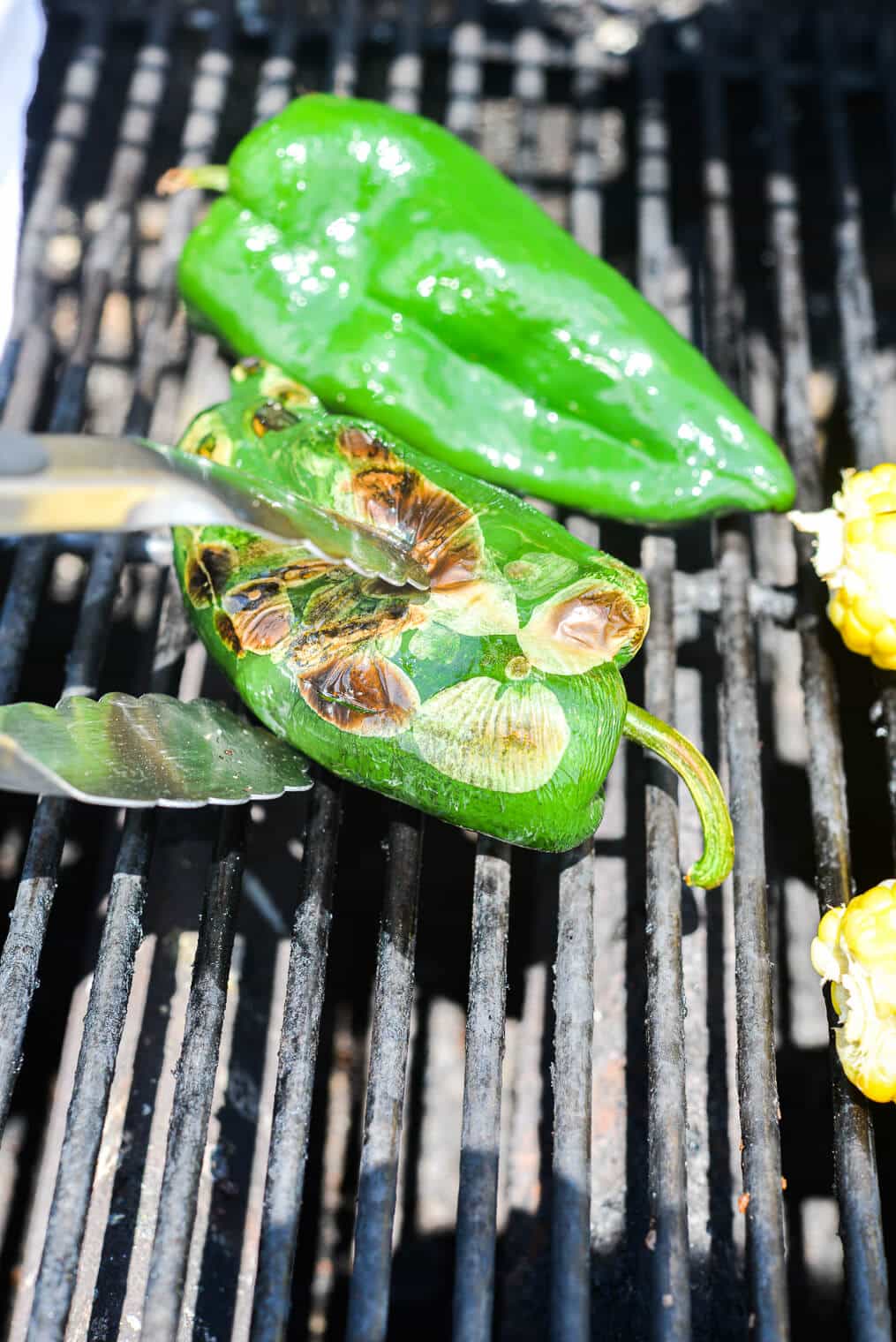 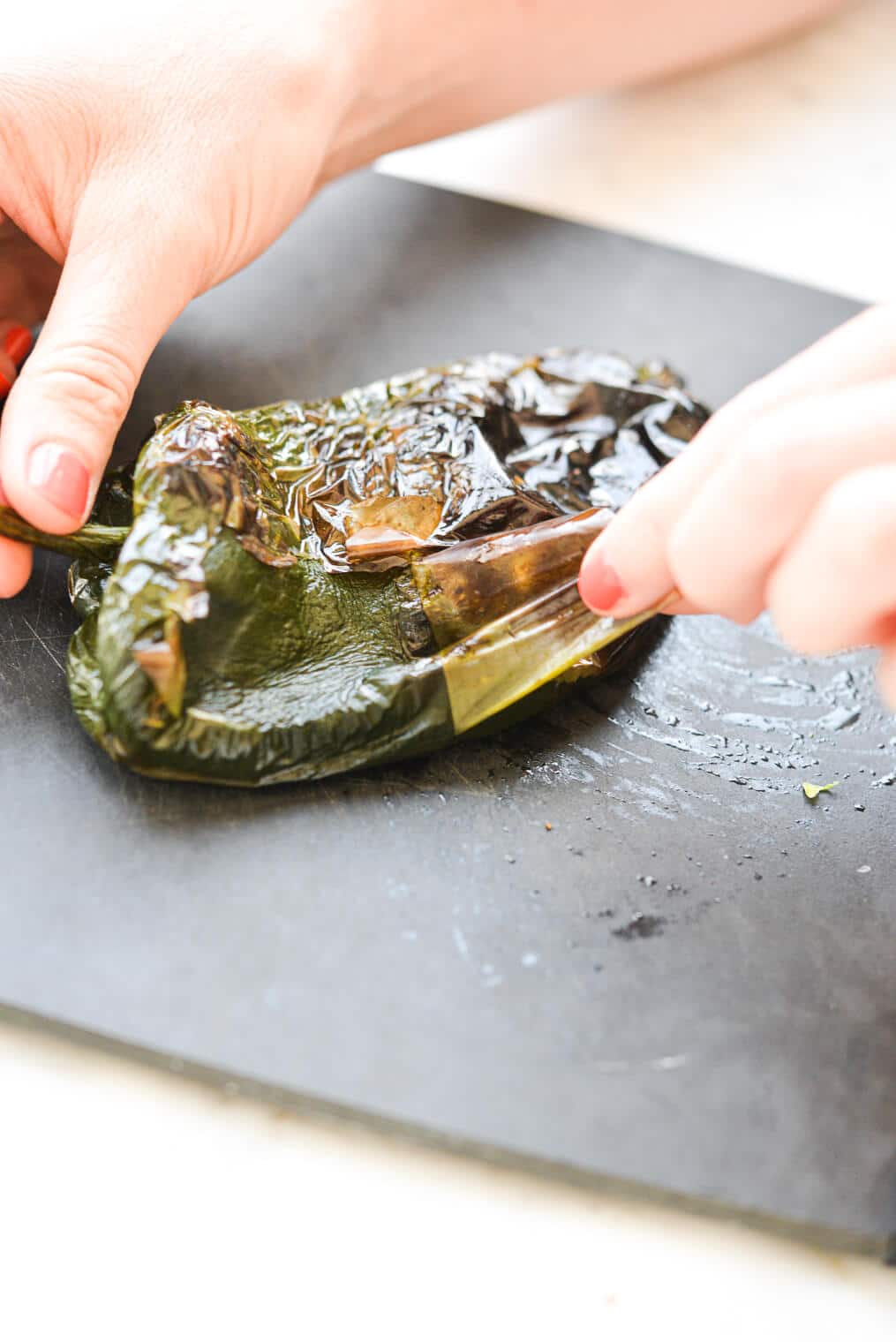 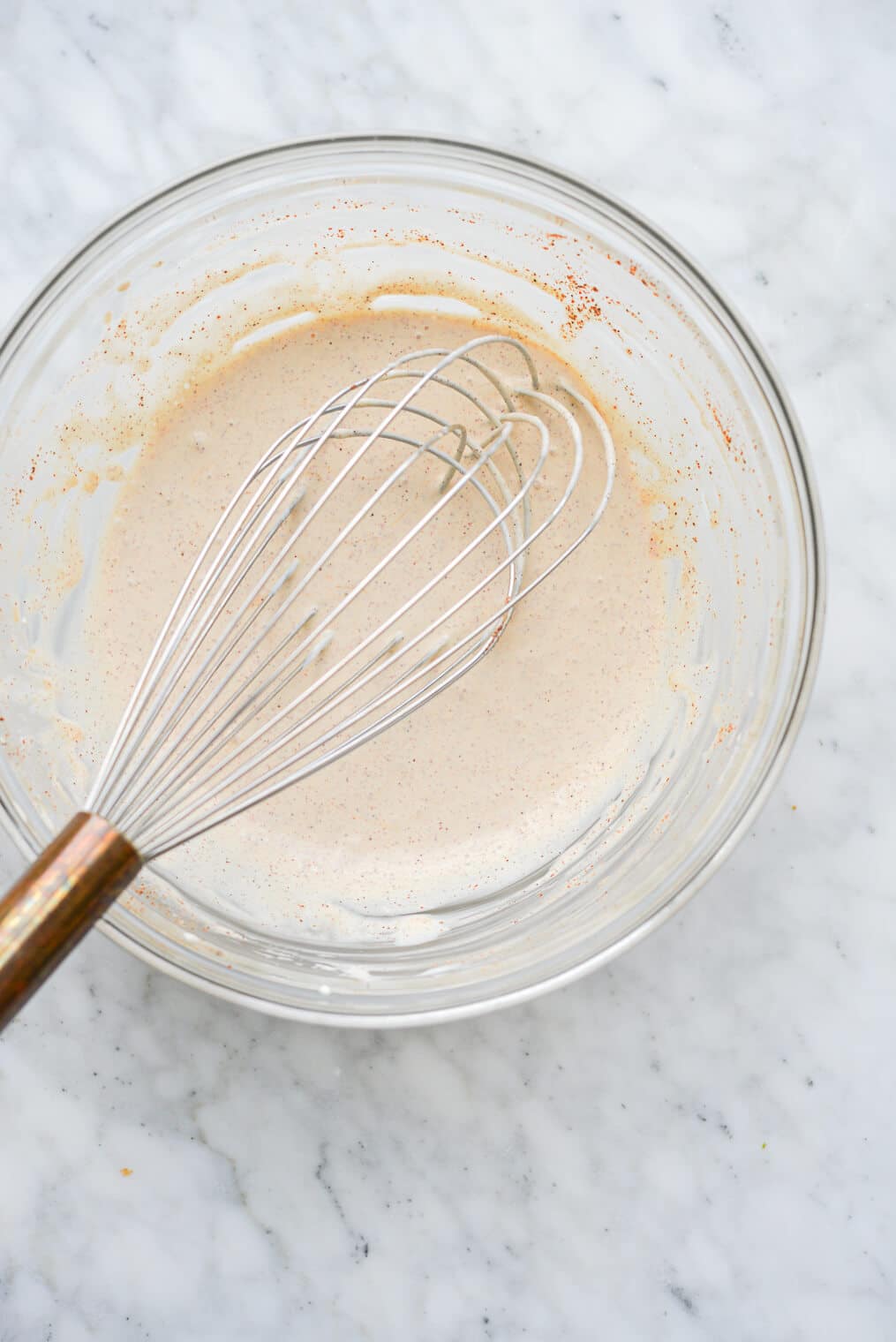 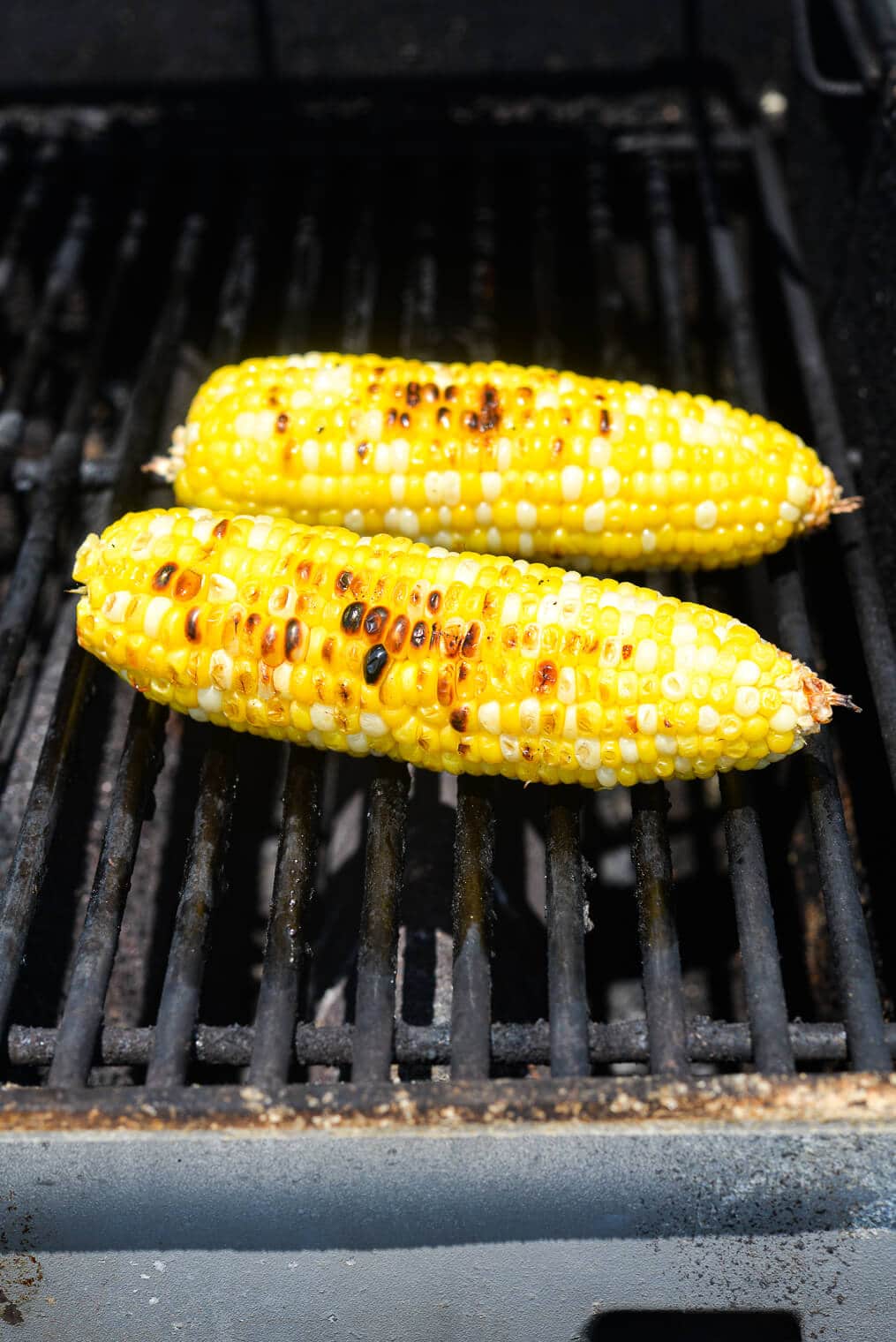 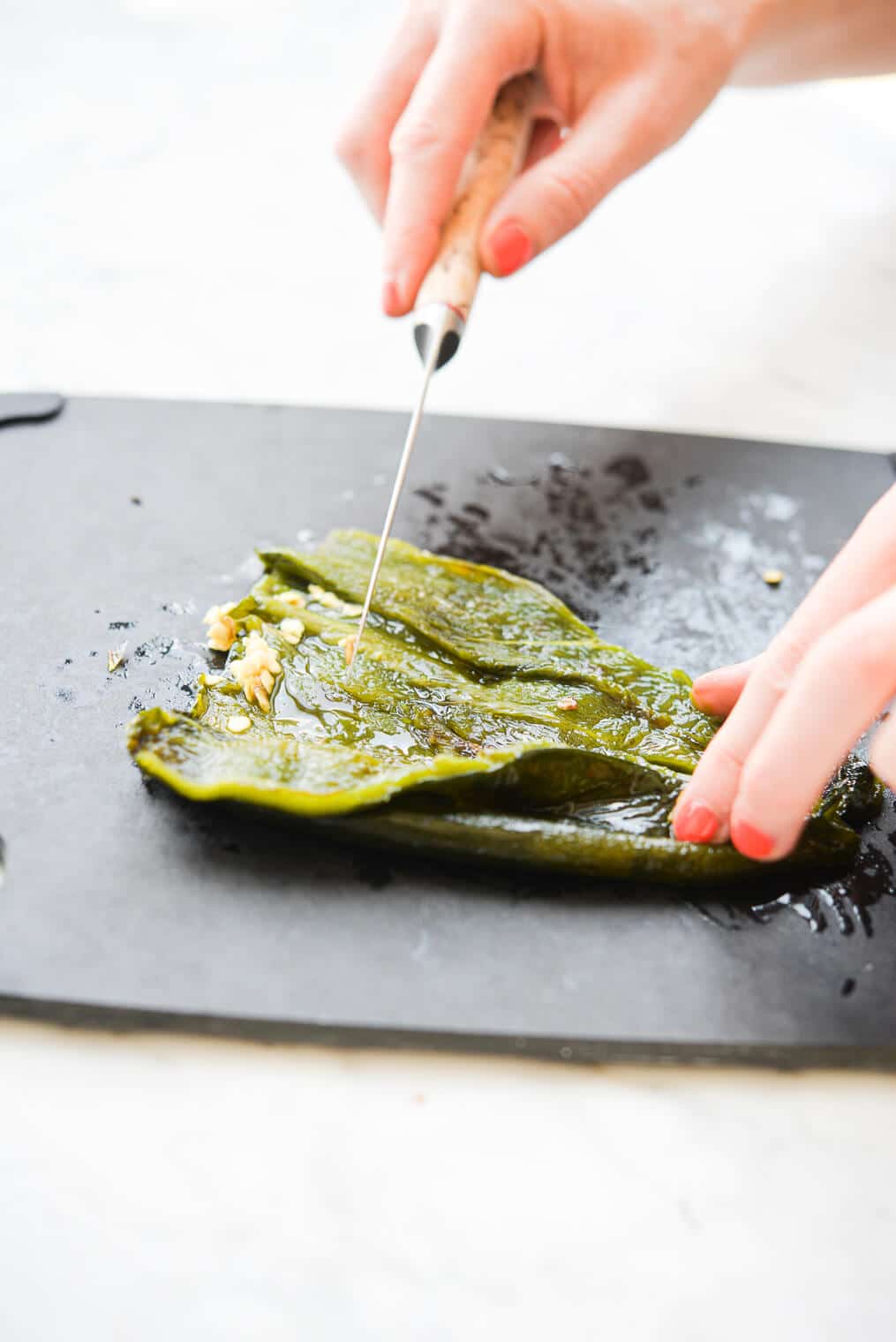 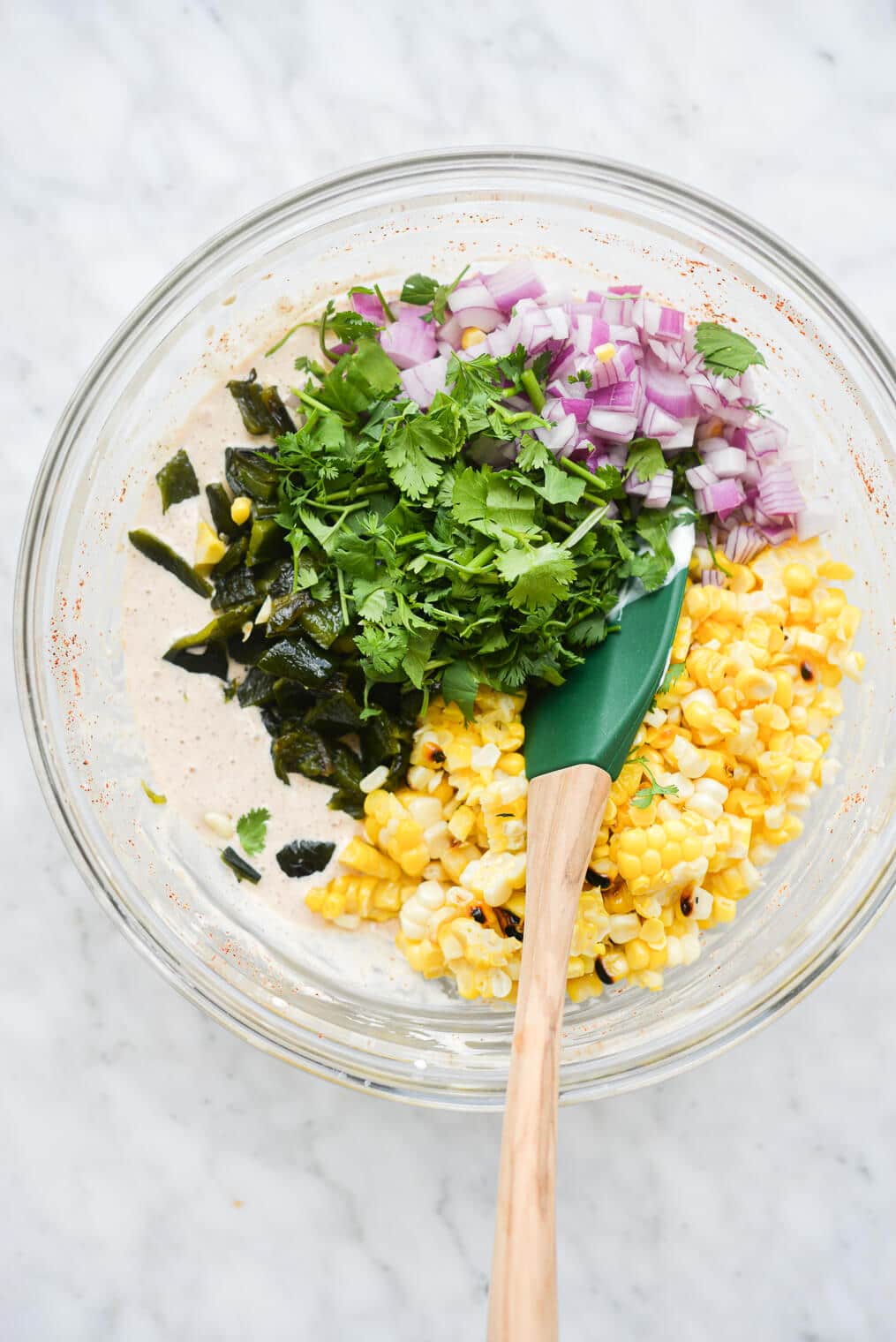 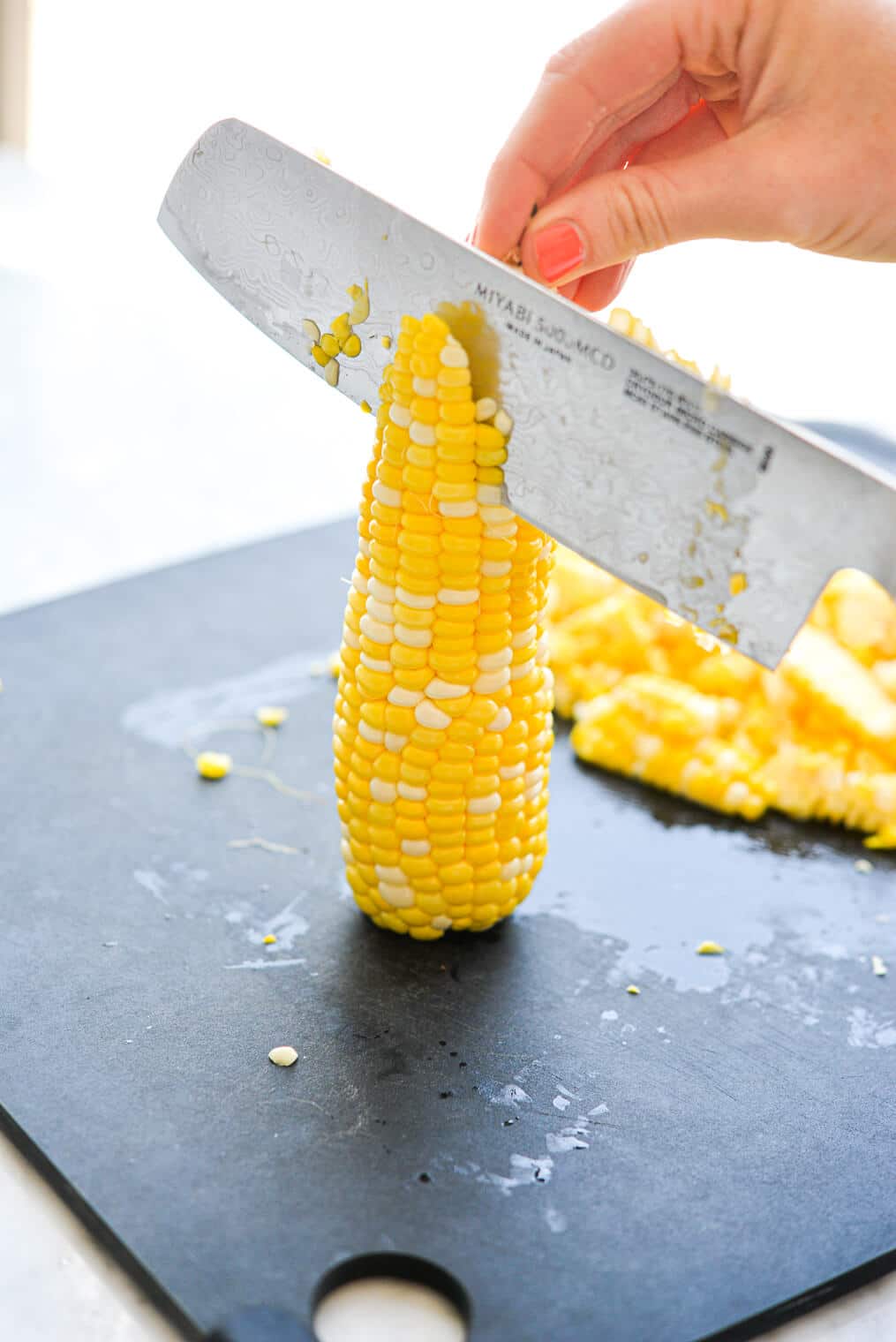 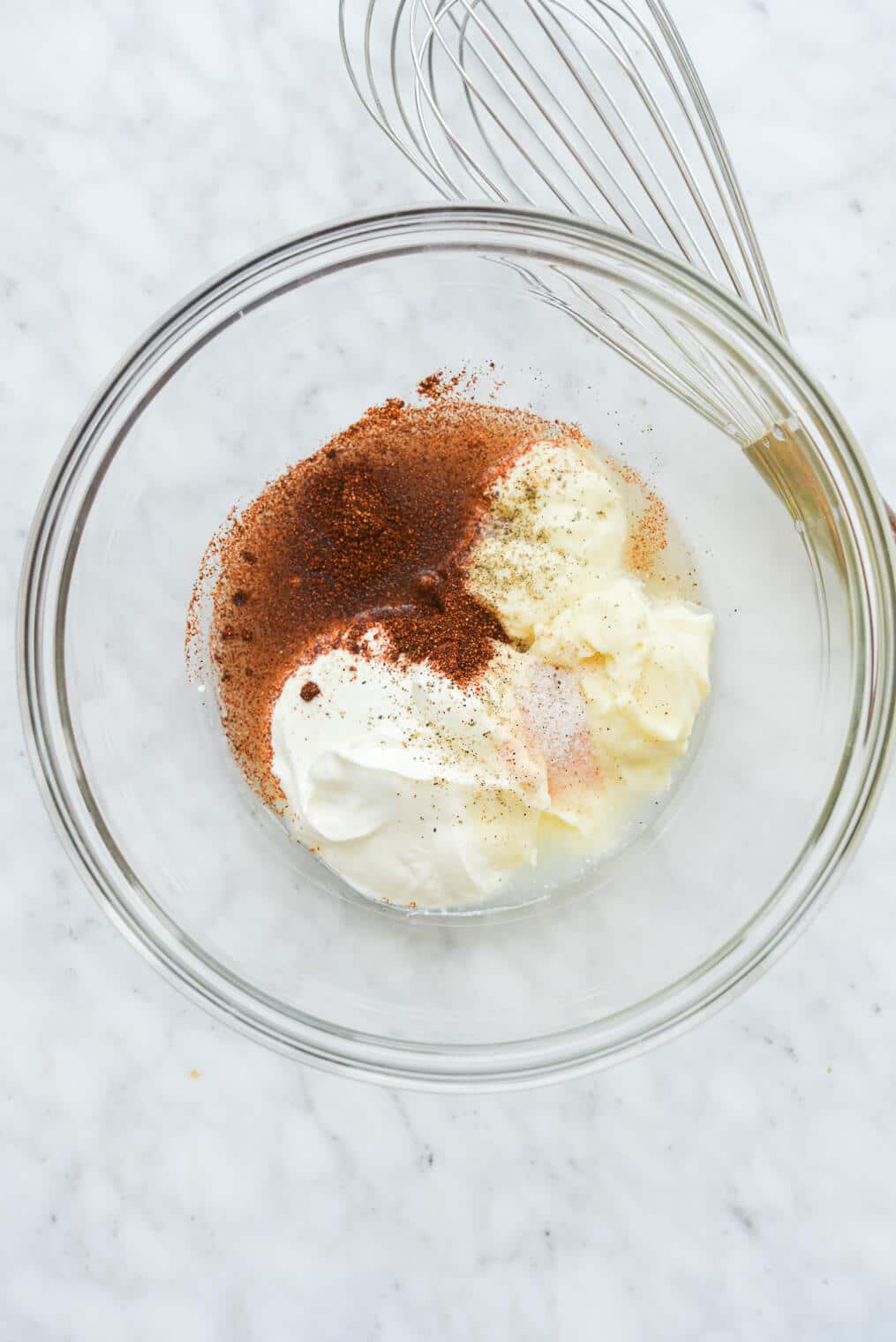 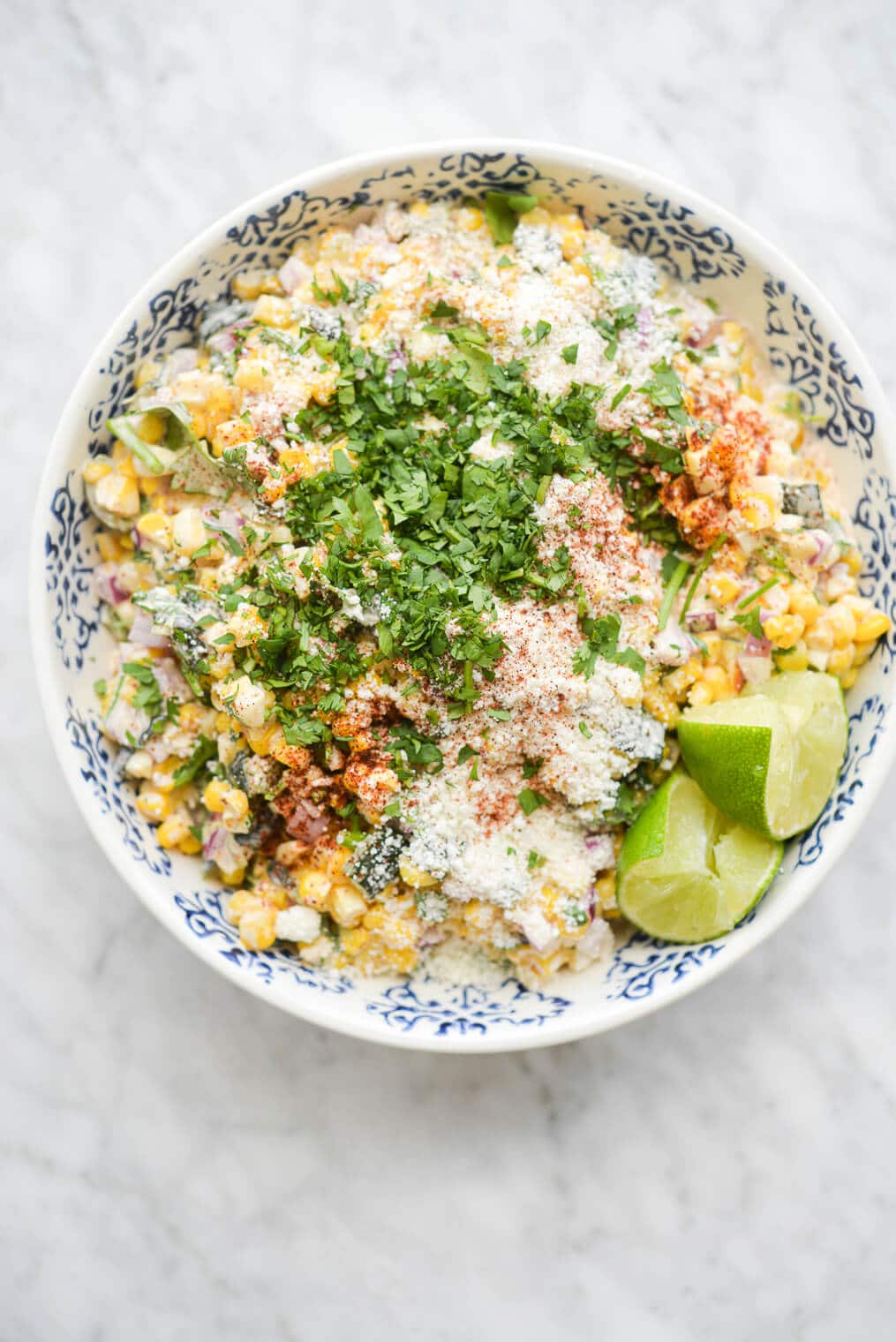 Mexican street corn salad is slightly tangy from the sour cream, really creamy, and so yummy. The corn itself brings a touch of natural sweetness to the dish and the mayo, sour cream, peppers, and chili powder add a hint of savory spice. The punch of lime juice really brightens everything up and makes the finished dish really refreshing!

What kind of corn do you use?

We just used regular ole ears of yellow corn here, but you can absolutely use frozen (and thawed) yellow corn kernels if you’d like. If you go that route, you’ll just skip the corn grilling part of the recipe!

Do you roast the corn before you put it in the salad?

Can you make this recipe without a grill?

Yes! If you don’t want to grill, we’d recommend defrosting frozen corn kernels instead of using corn on the cob. Alternatively, you could boil or roast your corn on the cob. For the poblanos, you would broil them on high for 4-5 minutes per side, until the skin turns black and blisters.

More of our Favorite Side Dish Recipes

This Mexican street corn salad would make for a really delicious side at a gathering, pool party, outdoor BBQ, or even just as part of a regular family dinner. Here are our best suggestions for what to serve with it:

Don’t feel like just because this dish is a typical part of Mexican cuisine, you *have* to serve it with another Mexican dish, though! This street corn salad would be equally as delicious alongside grilled burgers or chicken breasts!

Can you prep street corn salad in advance?

Yes, this salad would be great prepped in advance! The only thing we’d advise against is mixing up the cilantro ahead of time and waiting to sprinkle the cheese on top. The corn and peppers are sturdy enough to hold up to the dressing.

How do you store this corn salad recipe?

If you have leftover Mexican street corn salad, simply store it in an airtight container in the fridge.

While the salad itself will stay good for up to 4 days, know that you may need to give it a good stir to reincorporate everything before enjoying. 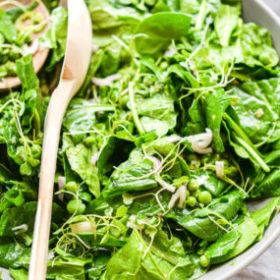 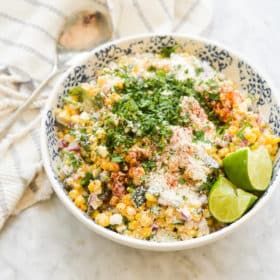 By: Amber Goulden
5 from 1 vote
Print Email
Prep Time: 15 mins
Cook Time: 10 mins
This Mexican corn salad has all the flavors of classic street corn and is the perfect side for summer gatherings!