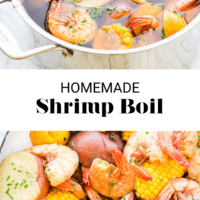 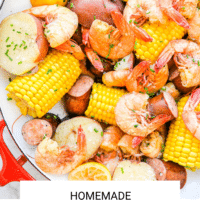 Complete with potatoes, corn, shrimp, andouille sausage, and several key flavor boosters, this shrimp boil is bold in flavor while still being so easy to make, it's great for a weeknight.

A shrimp boil is such a fun, healthy, and fresh way to mix up dinner! One thing I love most is that it's a complete meal all on its own, and the process truly couldn’t be easier. This recipe is an ideal option for outdoor gatherings (pretty hands-off if you're hosting a group) OR if you want a really fun, family-style dinner-in (put the shrimp boil in the middle + let everyone dig in!).

If you're looking for another really delicious shrimp recipe, these shrimp rolls are worth trying. For instructions on how to make this shrimp boil and the shrimp rolls work together in a dinner-series format (the foundation of Cassy's 3rd book, Cook Once Dinner Fix), click HERE.

What equipment do you need for a shrimp boil?

The items on this list are pretty standard shrimp boil ingredients — here’s everything you’ll need:

If you’re looking for a really delicious sauce to serve alongside your shrimp boil, THIS remoulade is an excellent choice.

How much shrimp do you need for a shrimp boil?

Our boil is on the smaller side as far as shrimp boils go and would serve 6-8 people — for something this size, you’ll need about 2 pounds of large shell-on shrimp. If you want to feed more people, though, feel free to up the ingredient amounts as needed. Just be sure that you up your pot size too!

Can you boil frozen shrimp?

I don’t recommend boiling frozen shrimp. Unlike ground beef (of which I'm notorious for adding to a pot before it's totally thawed so I can get started on dinner sooner), shrimp cooks too quickly to cook from frozen. The outside would thaw and cook and become tough before the inside has a chance to thaw and cook through. For best results, you’ll want them completely thawed first!

Should I thaw shrimp before boiling?

There are a few ways to do this! If you have the time, you can simply transfer the bag of shrimp to the refrigerator the day before you’re planning on boiling them — this option takes the longest amount of time. If you’re short on time, put the bag of shrimp in a large bowl of cool (not warm or hot) water (either in the fridge or on the counter) to thaw. Your shrimp should be totally thawed within 30 minutes!

How should you season shrimp boil?

How to Cook Shrimp Boil

The process is actually quite simple. You will need to be strategic about when to put the different components into the boil so that everything is done, but not overcooked by the end. I've taken the guesswork out of it and given exact instructions below:

How to Boil Shrimp

Boiling shrimp is really easy and quick! All you do is drop them in boiling water (the broth for this boil is heavily seasoned, but you could do this in simple water, too) and let them cook for 5 to 7 minutes, until they turn pink and start to curl in on themselves.

How do you boil shrimp without overcooking?

As soon as the shrimp turn pink and are opaque (not see-through anymore), they’re ready! This shouldn’t take any longer than 7 minutes.

Is it possible to make an Instant Pot Shrimp Boil?

Probably so! I haven’t actually tried it, though, so I can’t speak for exactly what the finished product is like. Keep in mind that this recipe requires a pretty large pot, so if you don’t have one of the larger Instant Pots, you may run into an overflow situation.

How do you keep a seafood boil warm?

While seafood boils are best enjoyed right out of the water (once they’ve cooled to touch), but I understand that it's not always possible to eat right away. If you’re trying to keep the seafood boil warm for a longer period of time, you have a couple of options:

What goes with shrimp boil?

The best part of a shrimp boil is that it’s actually a complete meal! The potatoes provide a nice starch, the corn stands in as the vegetable, and the shrimp and sausage star as joint protein components. If you want to serve something else alongside your boil, though, a nice crusty bread would be a great choice.

Can you leave shrimp boil out overnight?

No, I don’t recommend leaving this out overnight. Just like with any meal that includes an animal protein, leaving it out overnight can cause some potential food safety issues.

Can you freeze leftover seafood boil?

While I am very much on team freeze-all-the-things, a shrimp boil is something that I don’t actually recommend freezing. Cooked-then-frozen shrimp and the potatoes (funny enough) are tricky to thaw and reheat with an appetizing texture. Instead, plan on eating the leftovers for lunch or dinner sometime within 3 days of when it was originally cooked. 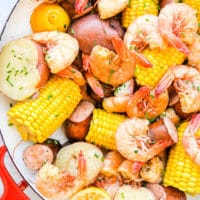 This shrimp boil is an easy, delicious, fun way to get a complete meal on the table!