Today we’re sharing our favorite Instant Pot chicken dinners that are sure to please the entire family, as well as our best tips for making chicken in the Instant Pot. 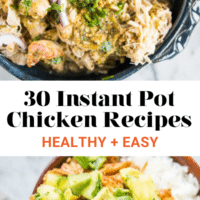 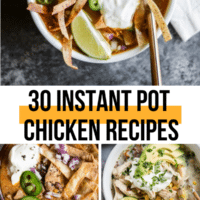 We know that after a long day of work (whether it be at home or away), cooking dinner can quickly be scrapped for take-out, which can be discouraging when your intention was to get a homemade meal on the table. These tasty, healthy Instant Pot chicken recipes are a game-changer on those busy weeknights and make for effortless one-pot meals that are sure to please the whole family! 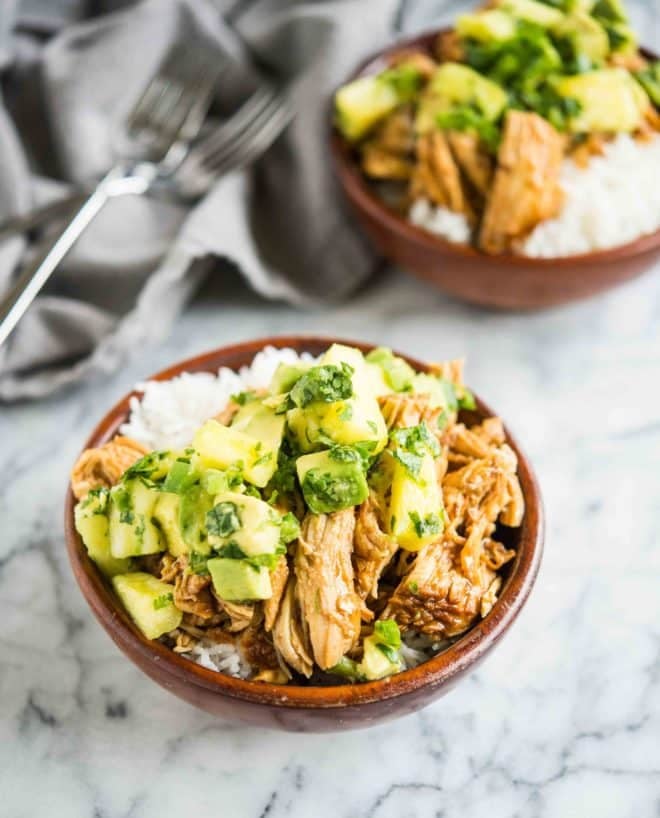 Cooking Chicken in the Instant Pot

How do you cook chicken in an Instant Pot?

Although you’ll want to reference the recipe you’re using for specifics, each recipe will typically have a few things in common: you’ll add some sort of liquid into your Instant Pot (water, broth, salsa, etc.), place your chicken in the pot, close the lid, seal it, and cook it under high pressure. It’s that simple!

How long does it take to cook chicken in a pressure cooker?

Just like the name “Instant” Pot implies, food cooks quickly in this small appliance. The Instant Pot is super efficient, and even though it takes some time to build pressure before the cooking actually begins, the entire process is relatively hands-off, allowing you to spend your time elsewhere while the Instant Pot does the cooking for you.

Here is a guideline for specific cooking times:

Can you put frozen chicken in the Instant Pot?

You can! Honestly, this is one of the most amazing things about the Instant Pot. Because it cooks so efficiently, the Instant Pot is able to heat frozen food to a safe temperature quickly. Do expect it to take a little bit longer for your Instant Pot to reach pressure if your chicken is frozen, though it still shouldn’t take more than 15 minutes.

Also, frozen chicken tends to release quite a bit of liquid when cooking, so it may work better for some recipes than others. Look at the recipe that you’re using for specific recommendations regarding the use of frozen chicken as it’ll likely be different from recipe to recipe.

Can you stack chicken in the Instant Pot?

Yes. Stacking chicken in the Instant Pot is fine. We recommend layering as evenly as possible so that your chicken cooks evenly though. When your food is finished cooking and the pressure is released, be sure to check the overlapping areas for doneness!

Now for the good stuff: the recipes! From bowls to tacos, soups, and chilis, there is truly something for everyone on this list! 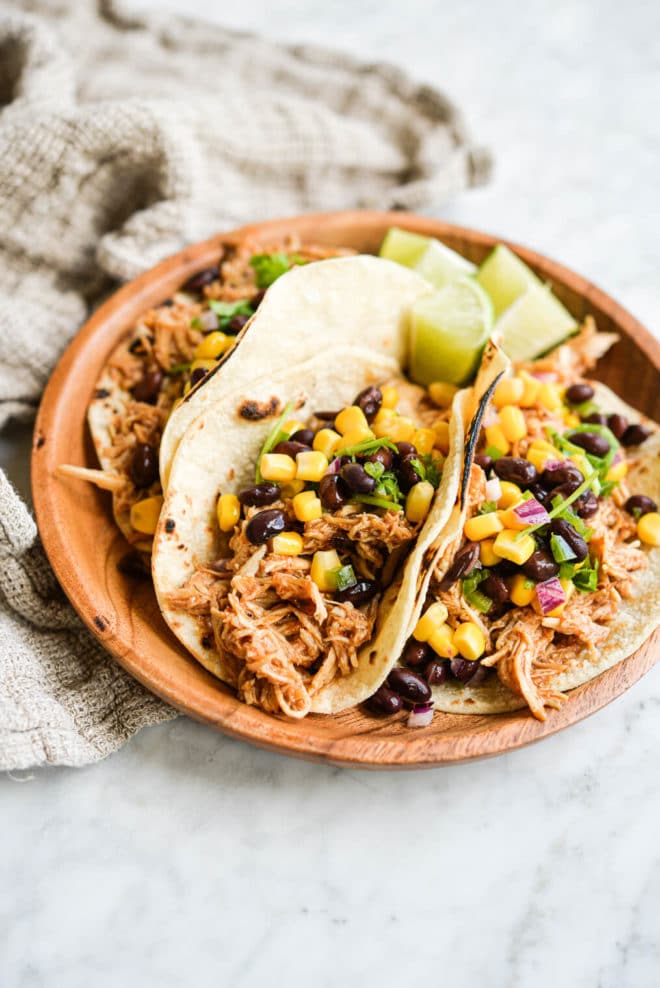 These BBQ chicken tacos are topped with black bean & corn salsa for an incredibly easy (and delicious) dinner! 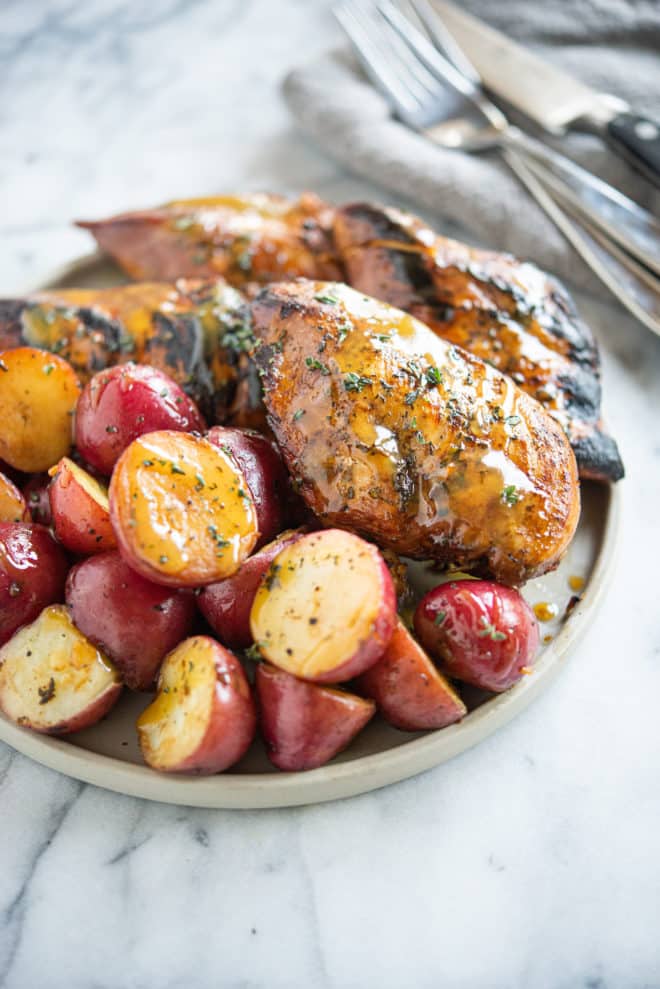 We love the crisp texture of the chicken that is created when the honey mustard brushed chicken is seared in the Instant Pot before being cooked under pressure. The honey mustard caramelizes a little bit, and gives a really great depth of flavor here! 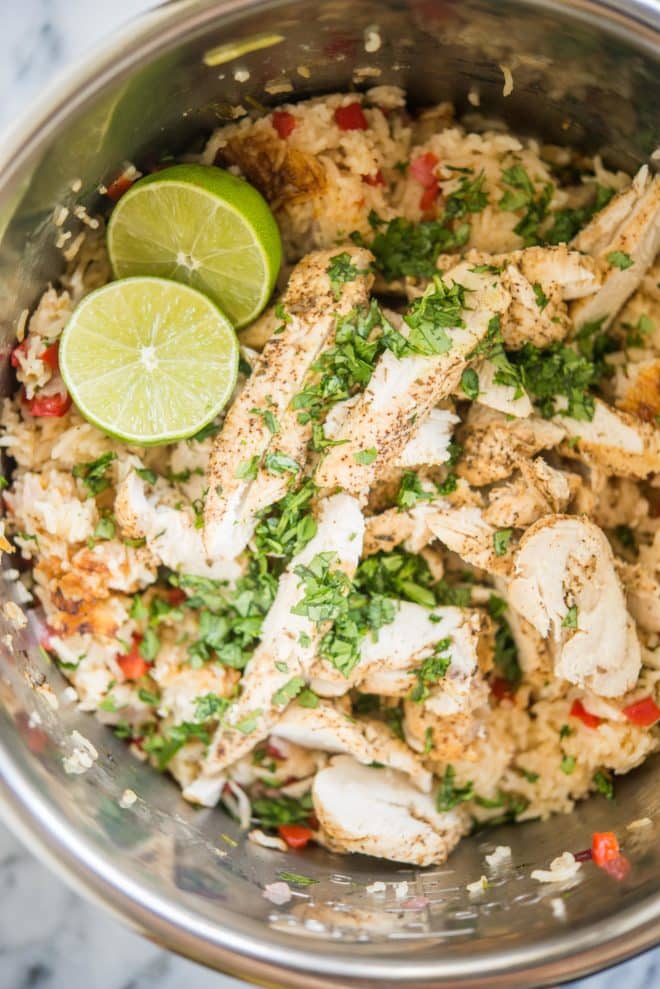 This one is the epitome of an easy, one-pot meal! The chicken, rice, bell peppers, and onions are all cooked together for a super hands-off take on classic fajitas. 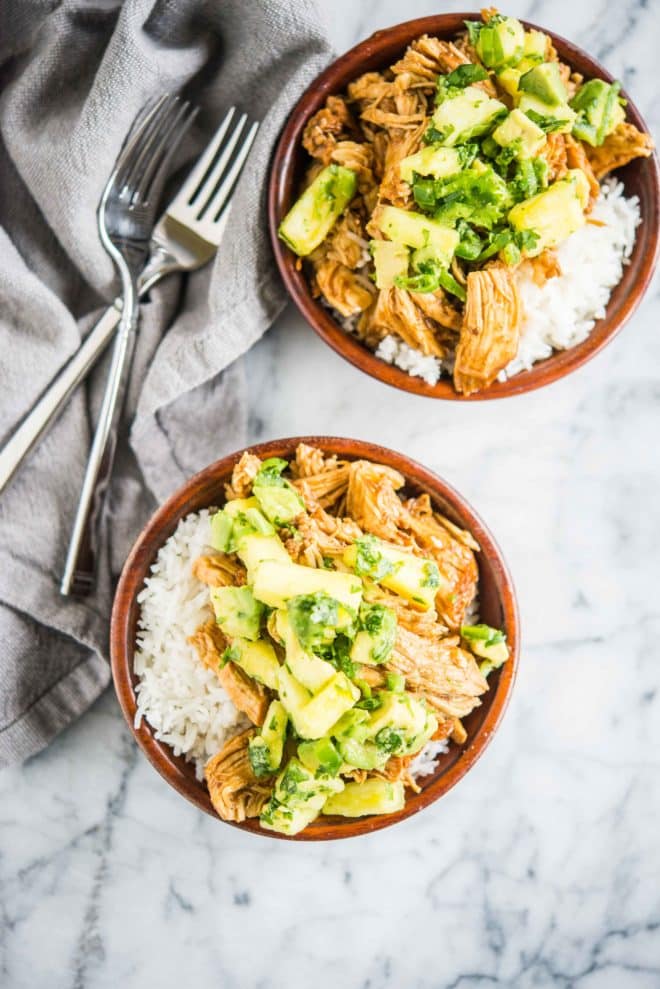 Topped with a fresh pineapple and avocado salsa, these bowls are perfect for summertime, and are sure to please the whole family! 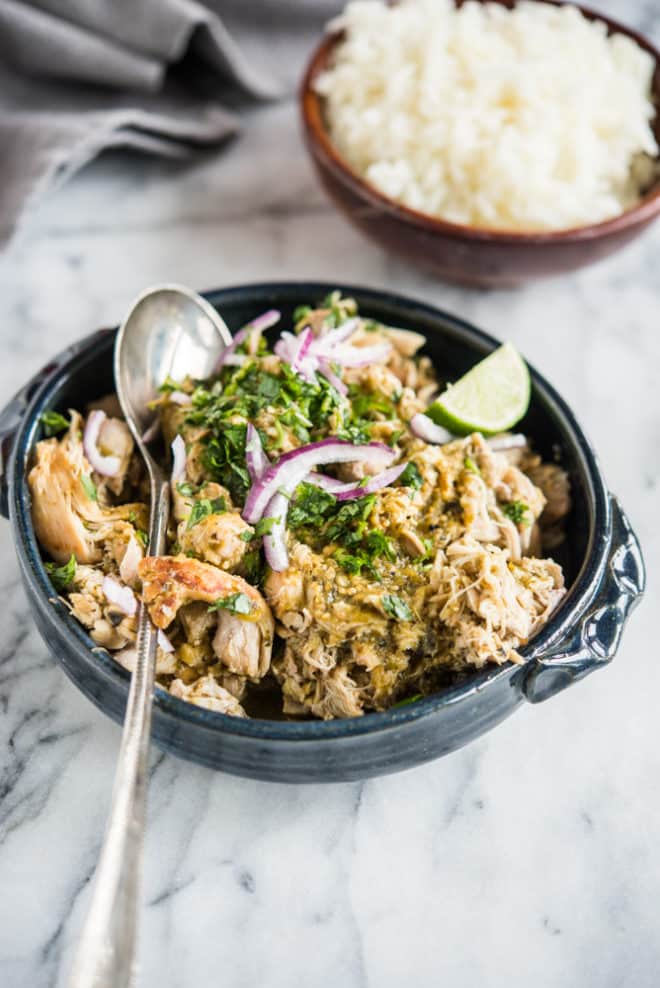 This meal comes together FAST with just two ingredients: chicken + salsa! Put this flavorful chicken over rice (white or cauliflower…you choose!), and you’ve got a complete meal in no time. 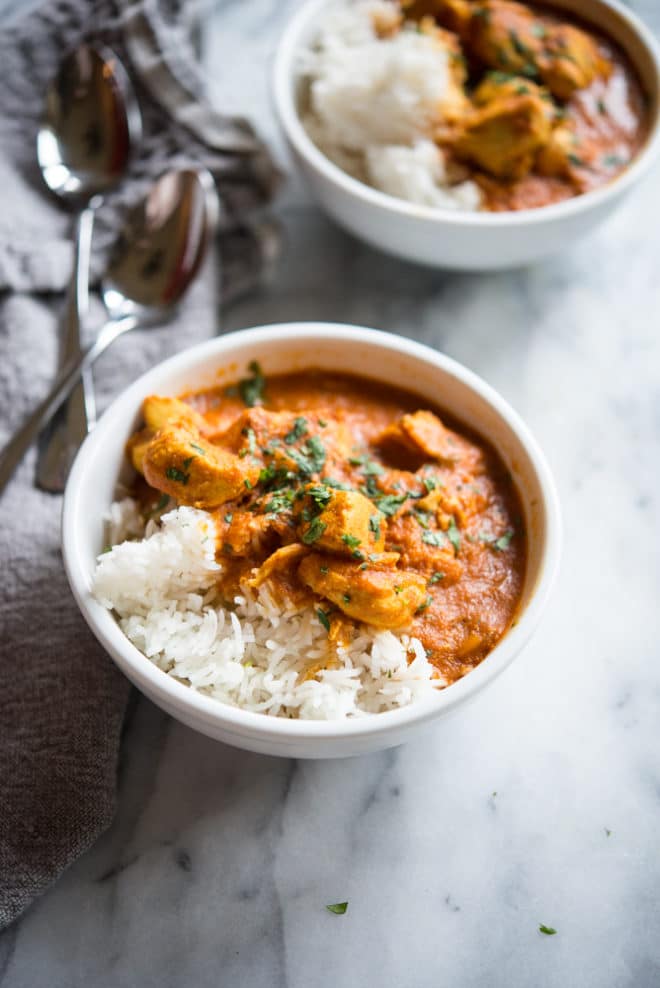 The beauty of this flavorful Chicken Tikka Masala is that it can be thrown in your Instant Pot right away for dinner in less than 30 minutes, or frozen in a Ziploc for dinner another night. We’ve got directions for both! 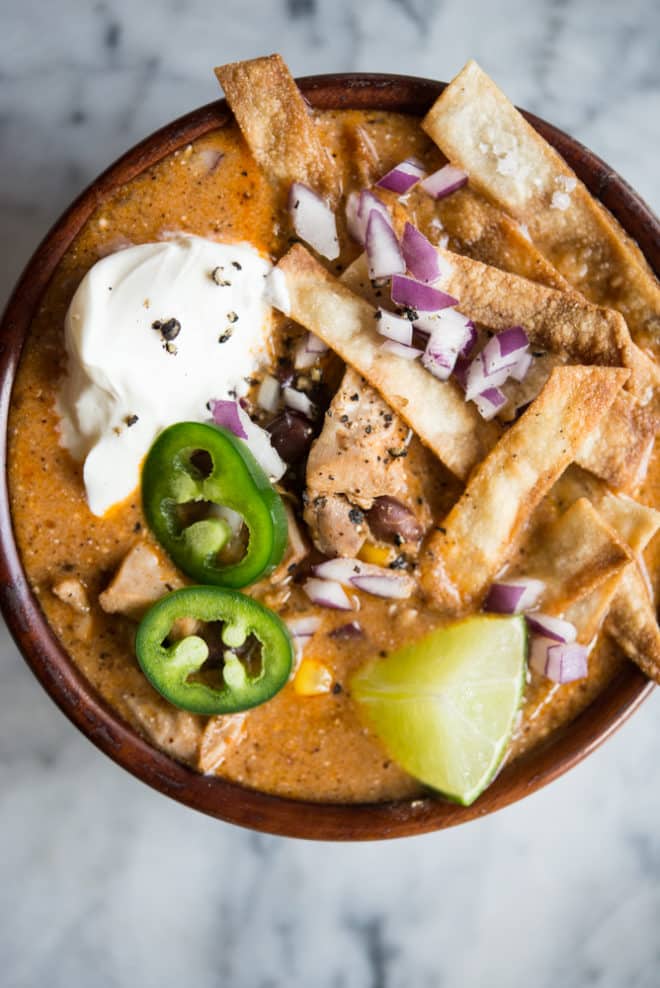 The perfect flavorful soup that’ll warm you up on a cold night! 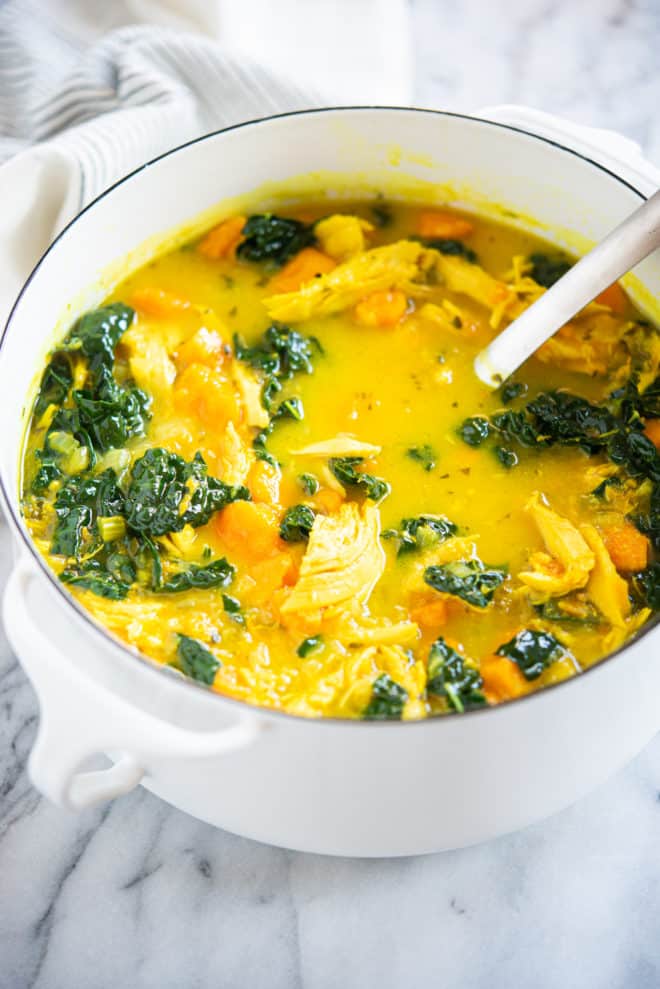 This soup can easily be made in the Instant Pot, and is a great one to have on hand when you’re feeling under the weather. 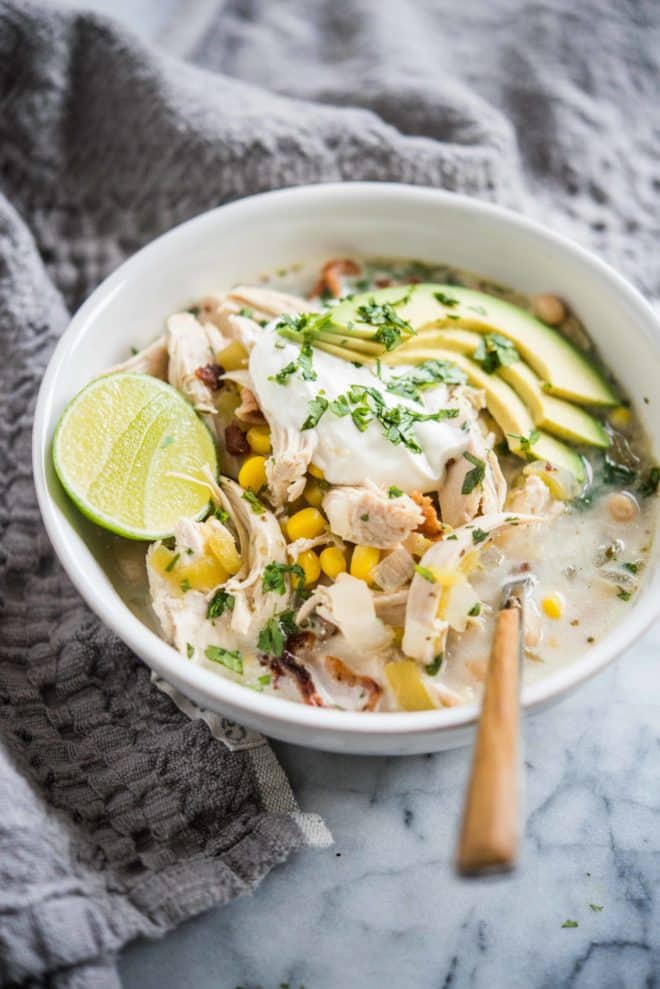 You can’t go wrong with ingredients like diced green chilis, bacon, corn, white beans, sour cream, and lime juice! Like the name implies, this soup is creamy and delicious! 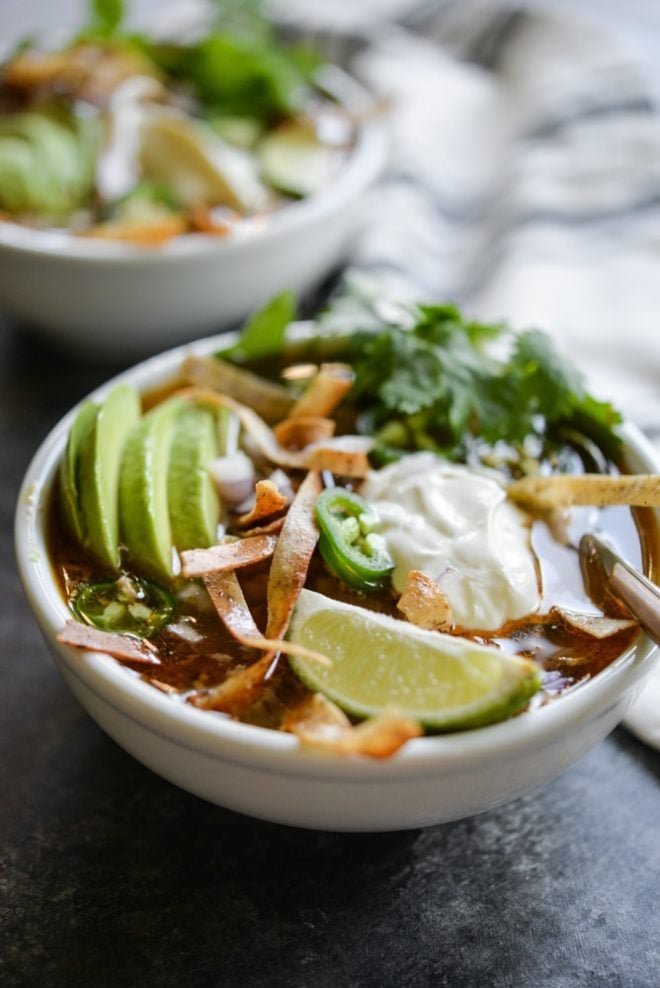 This one can be cooked in either a slow cooker or Instant Pot, but we recommend the Instant Pot route when you’re short on time, but still want to get a flavor-packed meal on the table. 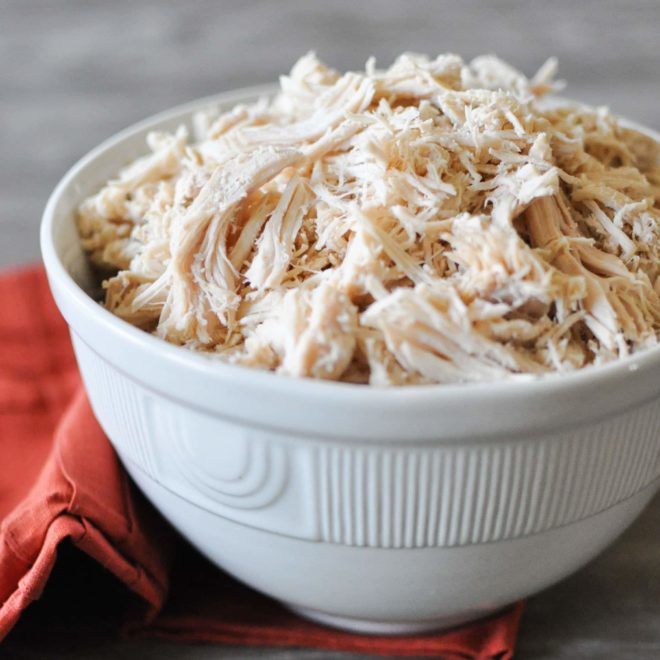 Be sure to scroll all the way down for Instant Pot instructions on this one. Make several pounds of this shredded chicken to quickly throw together Chicken Teriyaki Bowls, Twice Baked Loaded Sweet Potatoes, Chicken Taco Casserole, and any other recipe that you’d use shredded chicken for!

Easy Instant Pot Chicken Recipes from Around the Web 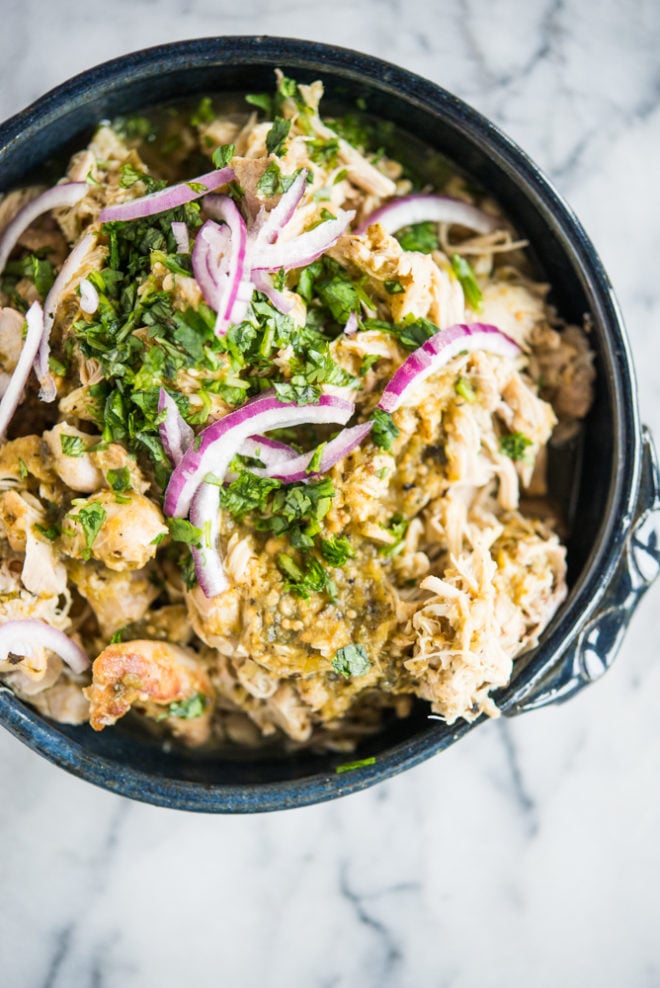 Now that you've seen our best Instant Pot chicken recipes, let's look at some of our favorites from around the web!

We hope you love the variety of healthy instant pot chicken recipes in this round-up! Whichever you choose, dinner is sure to be flavorful and done in no time at all!