They’re crunchy on the outside, chewy on the inside, footed with a perfect layer of dark chocolate, and so deliciously snackable/addicting that I need to regulate how many I put on a plate at a time. 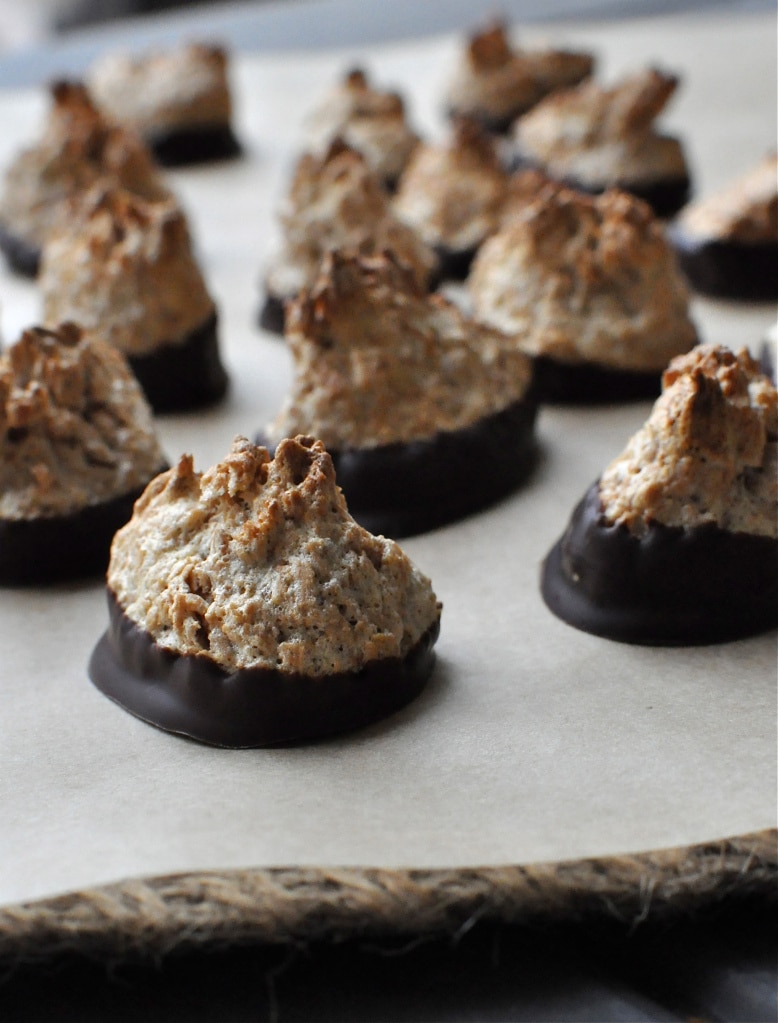 I paleo-ized the classic desert by using unsweetened shredded coconut, dark chocolate, and a small amount of honey folded into the stiffened egg whites for sweetener.

Let’s take a moment to talk about stiffened egg whites. In the past, if a recipe called for “stiffened egg whites,” I’d turn the page and write the recipe off. Creating “stiff peaks” intimidated the heck out of me. How do you know if they’re “stiff” enough? I was so confused.

I’m here to tell you, my friends, do not be intimidated. From one recovering stiff egg whites phobic to another, it’s really simple and difficult to mess up.

Give it a go. These 5-ingredient cookies are worth a try. 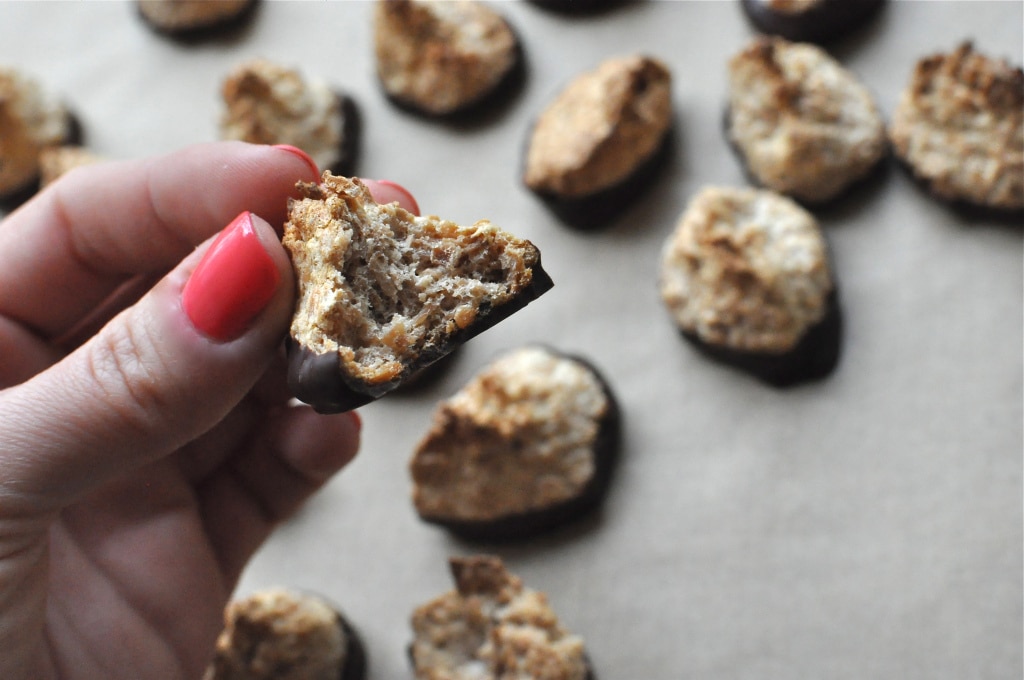 Today concluded my first year at PaleoFX in Austin, TX. My sister surprised me with a ticket for my birthday. I’ve been blown away by the heart warming open arms of this paleo community. I can’t wait to share all I’ve learned about functional medicine, holistic exercise, and new paleo foodie/blogger resources. I’m so inspired and eager to make this blog as helpful as possible.

I wish you a happy and blessed Easter Sunday.

Line two baking sheets with parchment paper and evenly spread the shredded coconut over the sheets.

Bake for approximately 15 minutes, removing and stirring every 5 minutes.

Separate 4 egg whites into a bowl and add the pinch of kosher salt. Beat the eggs on high until almost stiff peaks are formed.

Slowly add in the heated honey about 1 tsp at a time, beating simultaneously. Once all the honey is added, beat the egg whites until stiff peaks are formed.

(Note: stiff peaks are marked by when you shake the beaters and the peaks of egg white foam do not move or wiggle.) 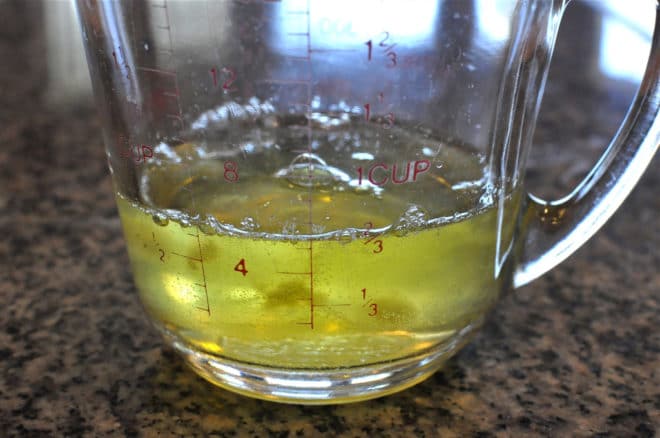 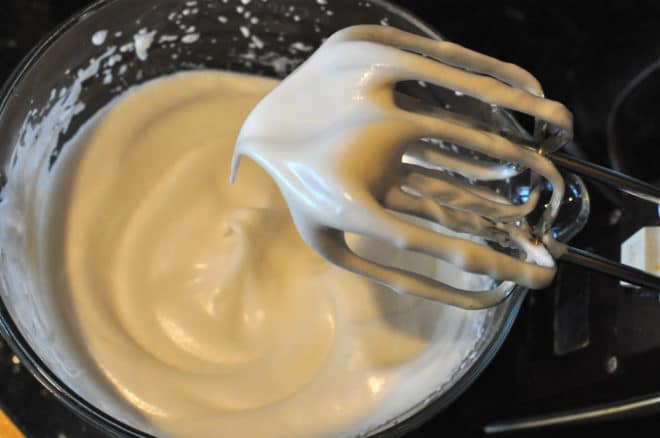 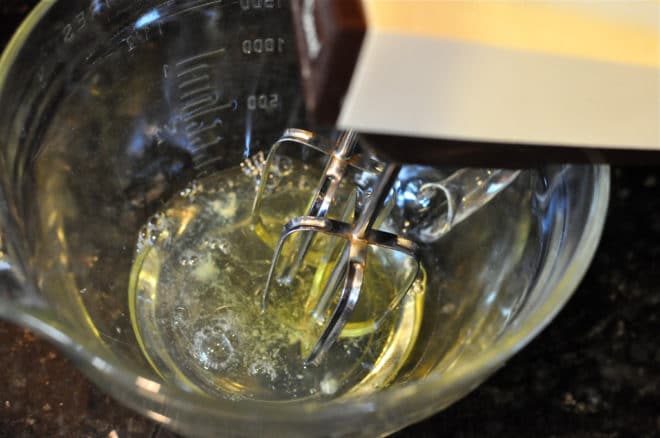 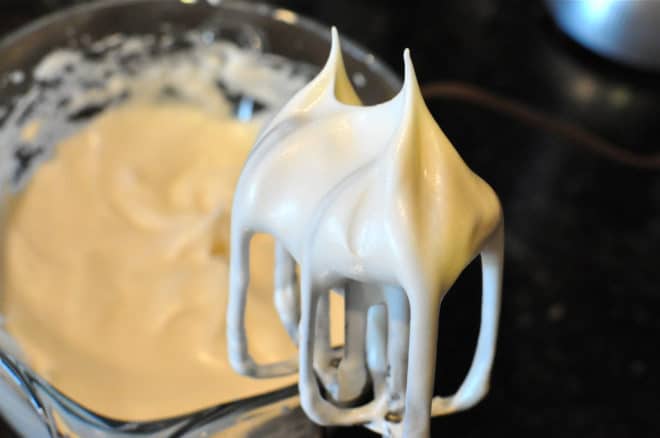 Fold in the cooled and toasted unsweetened coconut with a large spatula in four batches. 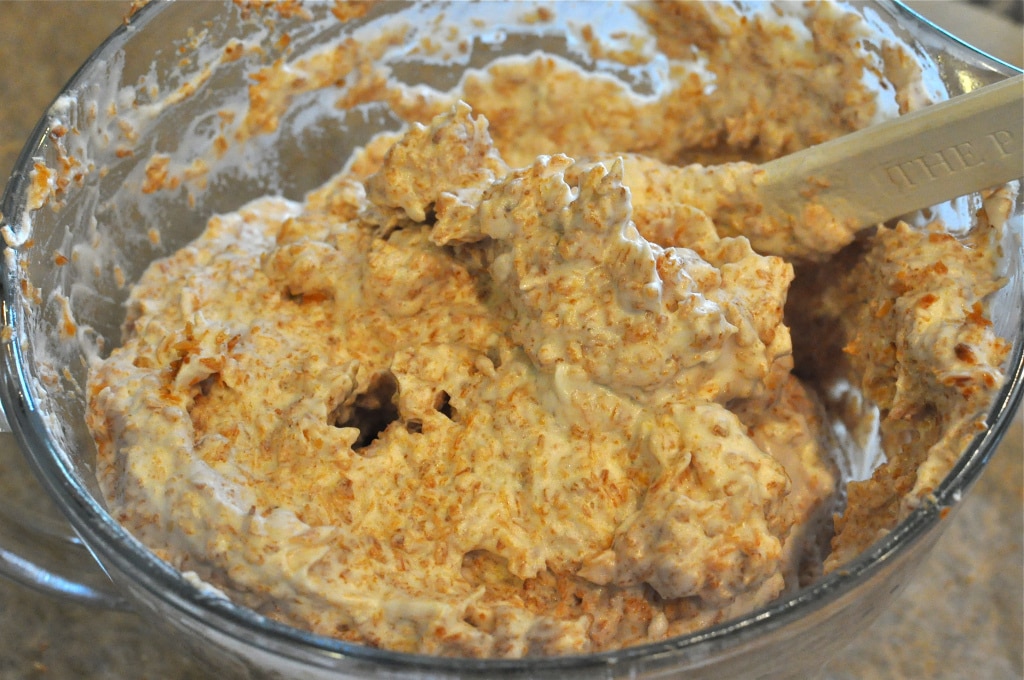 Line the baking sheets with more parchment paper. Using a gallon-sized Ziploc bag, spoon the egg white/coconut mixture into the bag filling towards one corner. Cut the corner of the bag off.

(An actual pastry bag works too.) 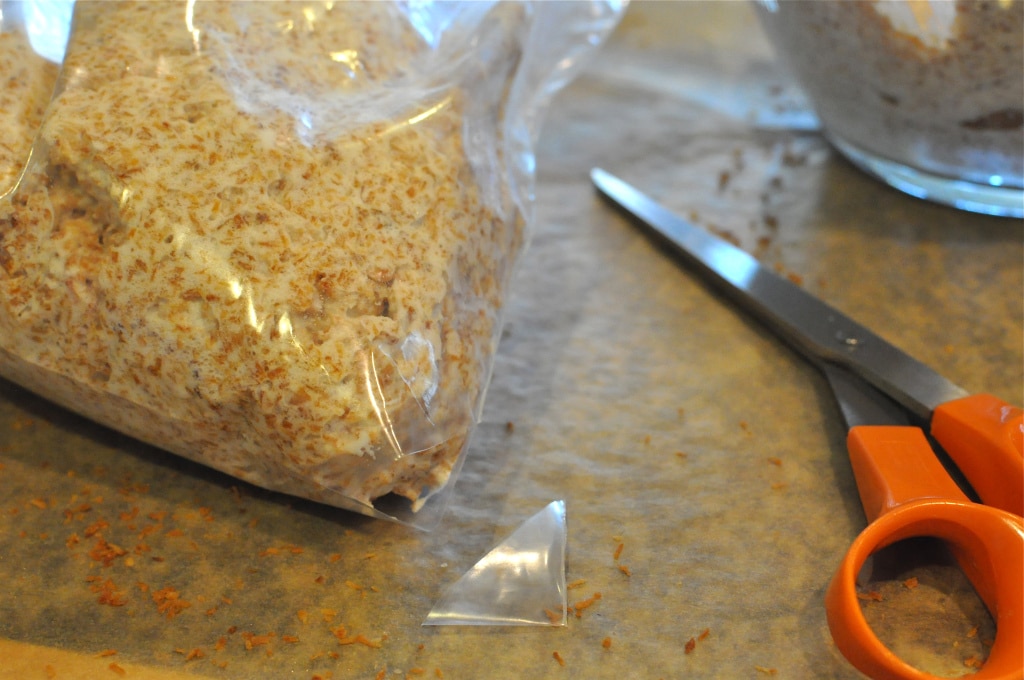 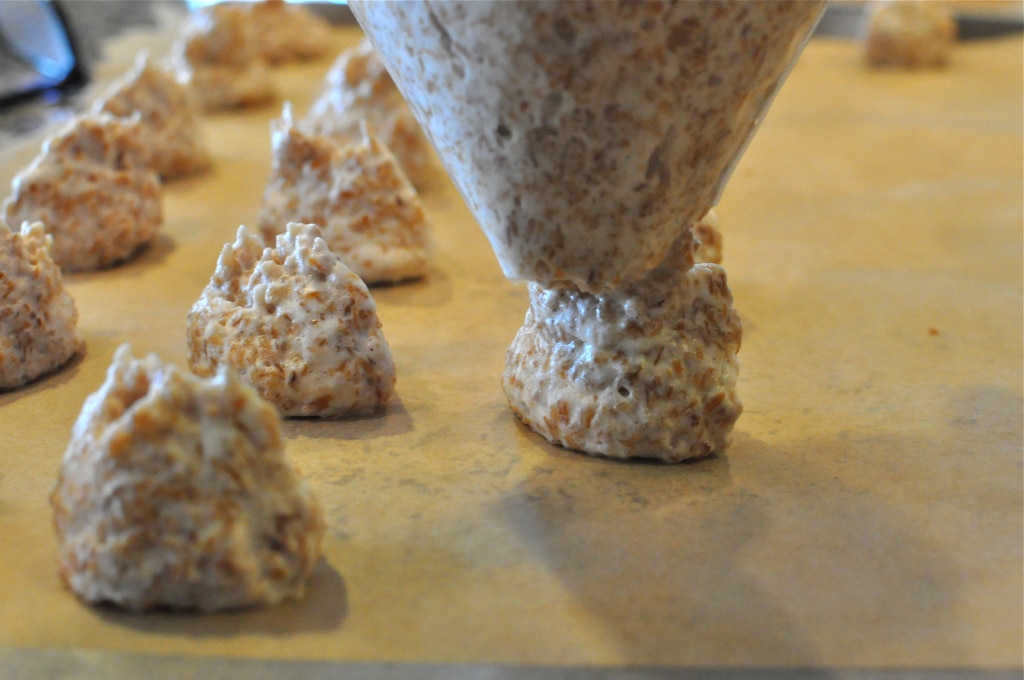 Squeeze about 1 Tbl dollops onto the baking sheet. Bake for 15 – 20 minutes, or until the outside is golden brown. Remove from the oven and let cool while you prepare the chocolate. 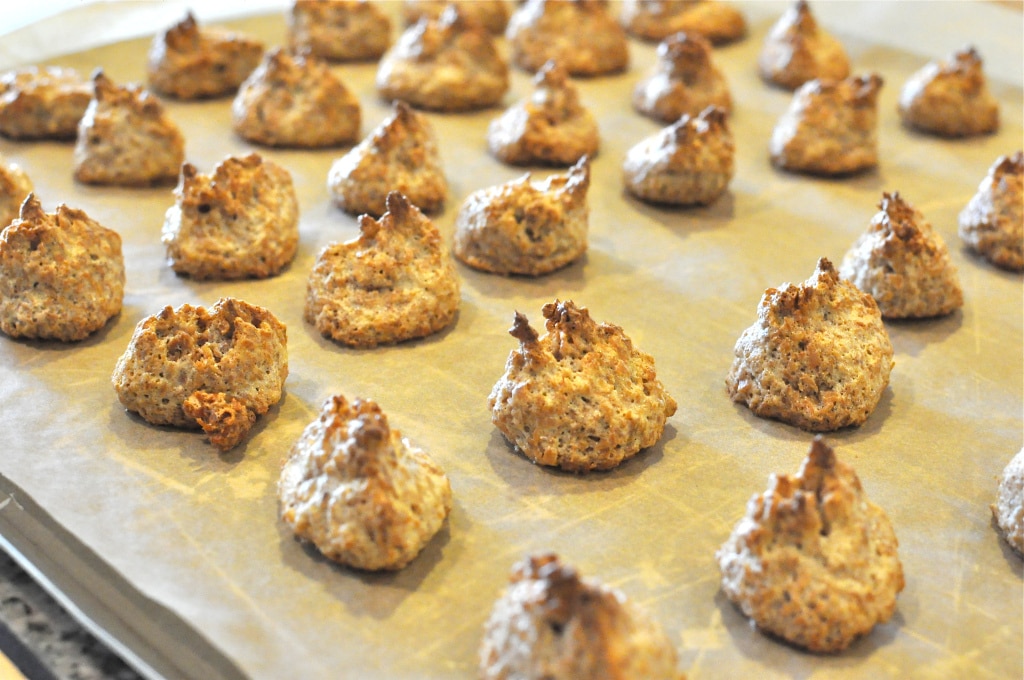 When the cookies are cooled, dip the bottom into chocolate and set on parchment paper.

Set the chocolate by placing the cookies in the refrigerator. This should take about 30 minutes. 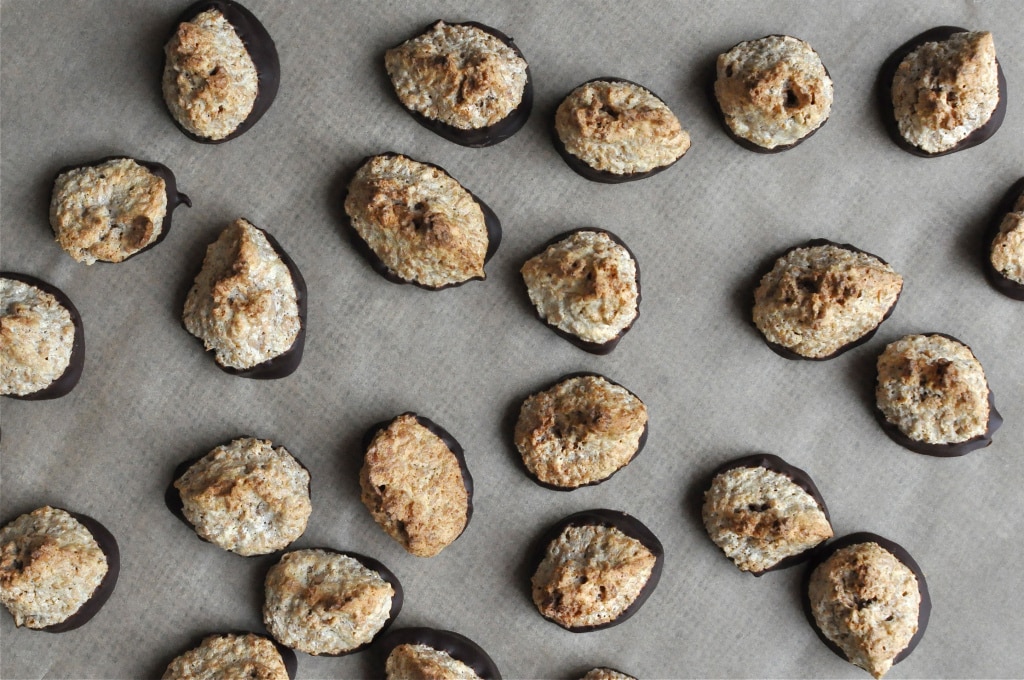