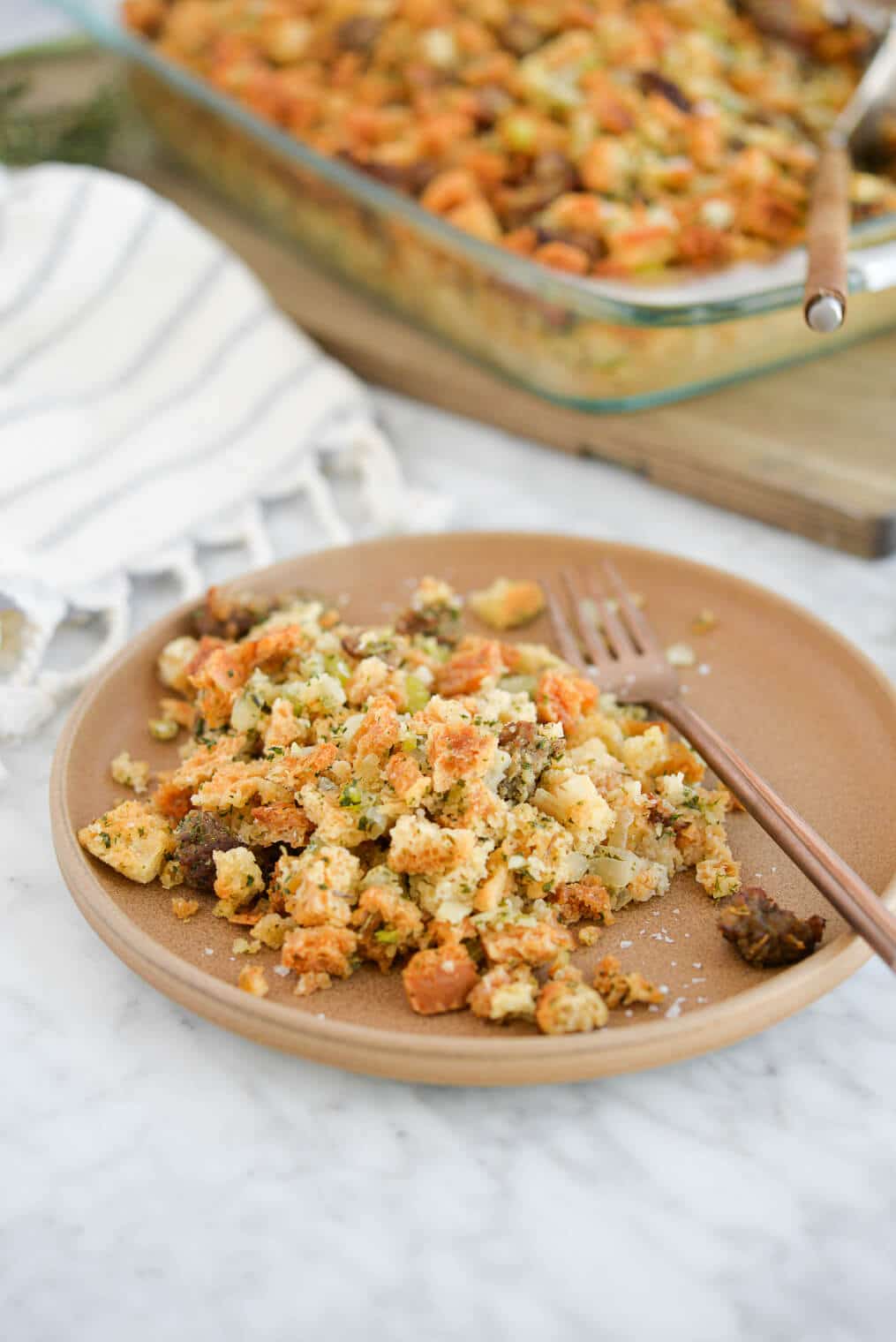 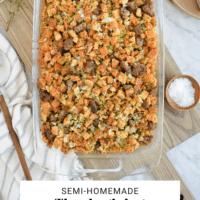 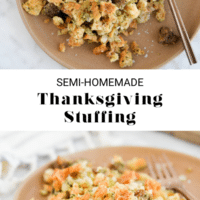 This Semi-Homemade Stuffing recipe elevates store-bought box stuffing all while taking the fuss out of the traditional homemade Thanksgiving dish.

There are a few very essential components of Thanksgiving dinner that I feel like are *musts* and not just yummy extras. Turkey, stuffing, mashed potatoes, gravy, green beans, some form of marshmallowy sweet potatoes, and pie (preferably pumpkin!) are ALL musts in my book, and Thanksgiving just wouldn’t be complete without each and every single one of those components sitting on the holiday table!

Here’s the deal, though, stuffing, though a favorite classic side, can be fussy and finicky, leaving less experienced cooks frustrated, discouraged, and generally just “over” the whole thing. Ready for the good news, though? IT DOESN’T HAVE TO BE! This semi-homemade box stuffing recipe is as easy as they come, but still yields an incredibly delicious finished side dish!

Let’s get this out of the way first! What in the world is the difference between stuffing and dressing? Simply put: stuffing is *technically* only stuffing when it is actually stuffed inside of the turkey. Makes sense, doesn’t it? Because the two names (stuffing and dressing) have been thrown around interchangeably for so long now, though, either is acceptable, stuffed or not.

This stuffing is NOT stuffed inside of a turkey, but we’re calling it stuffing nonetheless because that’s what it is to us! It’s baked bready goodness that soaks up gravy beautifully and sits next to our sliced turkey and green beans and totally holds its own on our holiday plates.

Bottom line: if you’ve always called this delish side “stuffing” (even if you’ve never actually stuffed your bird with it), keep calling it stuffing! If you prefer the term “dressing,” call it that! You do you.

While we’ve included a recipe below, the beauty of starting with boxed stuffing mix is that you can really make it your own! Because boxed stuffings come in different sizes, know that this recipe is super forgiving and can absolutely be doubled (or even tripled) as needed!

You can pick a few of these, or add multiple!

Truly, this stuffing is exceptionally easy! In fact, it’s easy enough that we’d be willing to bet that ANYONE (regardless of prior Thanksgiving stuffing experience) can *not only* just pull it off, but pull it off REALLY well! Here’s how you’ll bring this lovely side together:

We hope this quick, easy take on the classic Thanksgiving recipe makes stuffing feel like something you can tackle this holiday season!

More of our Favorite Thanksgiving Sides

Q Is it safe to stuff a turkey?
A

We do feel like it’s safe to stuff a turkey, but it actually isn’t our preference. Here’s why: generally speaking, when a turkey is stuffed, it takes a longer amount of time to cook, and as a result of this, the turkey inevitably dries out. To avoid this, we think that serving your stuffing (er, dressing!) on the side is the best way to go.

Q Can I make stuffing ahead of time?
A

YES! Sausage stuffing is an excellent thing to make (or semi-make) ahead of time. We like the idea of getting the veggies and sausage cooked the day before Thanksgiving (just pop them both in an airtight container and store in the refrigerator) so that a quick mix and bake is all that is required on Thanksgiving day. 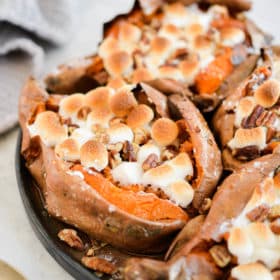 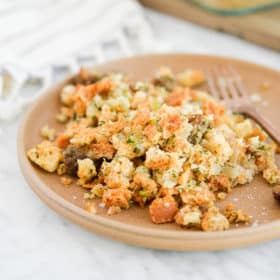 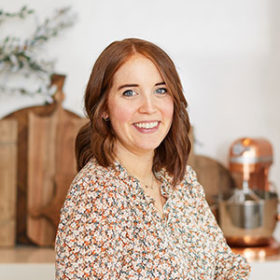 Brandi leads our efforts on content audits, outline construction, website calendar management, and a great deal of writing. She could unashamedly watch reruns of Friends + Harry Potter movies and never get bored!⁠ ⁠ ⁠
Get to know Brandi