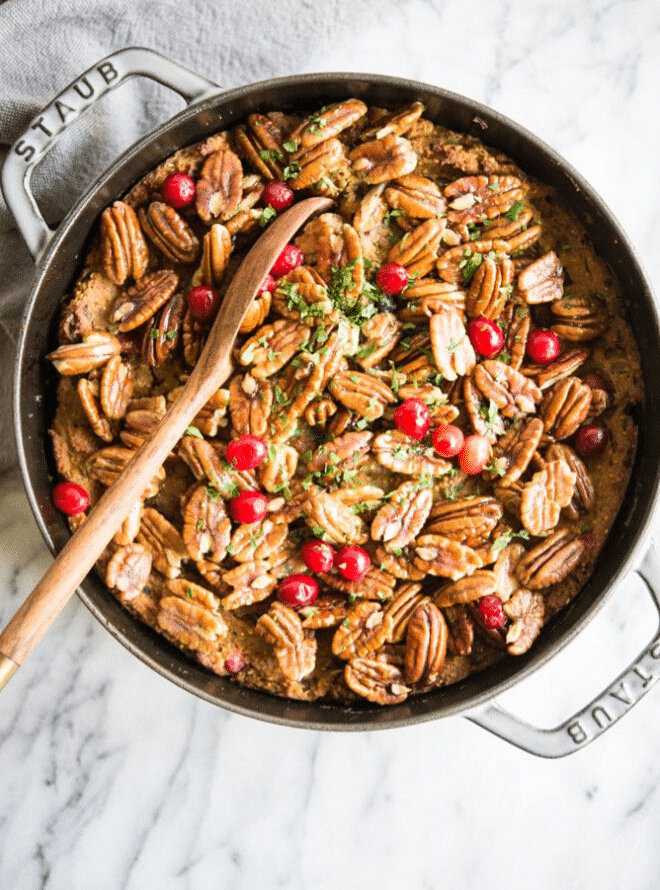 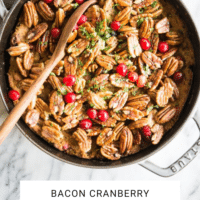 This bacon cranberry cornbread stuffing will have everyone at your Thanksgiving table going back for thirds! A gluten free cornbread base is combined with flavorful herbs, studded with salty bacon, tart cranberries, and topped with sweet honey butter pecans for a decadent side dish.

We are about to knock your Thanksgiving socks off with this Bacon Cranberry Cornbread Stuffing, and we aren’t sorry about it one bit! This is the most DELICIOUS spin on a traditional turkey day side that we’ve ever dreamt up, and it met all our expectations and then some. We take a slightly honey sweetened gluten-free cornbread base (thank you Mama Garcia!), and jazz it up with a bit of tart sweetness from cranberries, crispy, salty bacon, and a picture-perfect crust topping of honey butter pecans.

If you haven’t noticed by now, we love to drop some fun knowledge bombs about the foods we create here at Fed + Fit. Cooking and creating delicious, healthy meals is so much fun, but knowing a little bit of history behind these foods makes the process so much more interesting!  So let’s learn about stuffing! Stuffing, dressing, filling – there are so many monikers for this must-have turkey side, that it can get a a little confusing. They’re all essentially the same thing, but depending on where you’re from, you may call it something different around your dinner table! While we don’t know whether or not the pilgrims actually had stuffing at their dinner, by all accounts, it’s highly likely that there might have been some sort of wild-rice based side served. The first real, documented accounts of a stuffing-type side at Thanksgiving was in the early to mid-1800s, with the stuffing literally being cooked and prepared INSIDE of the bird (thus the name!). From there, the side dish has evolved to become it’s own attraction, sometimes still cooked inside the turkey, or cooked and served in a casserole style pan, depending on preference.

More of our Favorite Thanksgiving Recipes

Chances are, you’ve probably at some point in your life consumed that old secret family recipe – Stovetop Stuffing! The 1970s made this boxed, just add water mix wildly popular, and easily accessible to most families. While the ingredients may leave much to be desired, this is the texture and flavor that so many of us associate with our stuffing needs! Our Bacon Cranberry Cornbread Stuffing delivers on that moist, fluffy texture, but amps up the flavor and knocks the boxed options out of the park.

With a few tweaks its easy to make stuffing gluten-free and tummy friendly. First up, we make the cornbread that we’ll be using for the base gluten free. We use this corn meal and this gluten-free flour to make our tried and true base, bake it, then cool it. While the cornbread is baking, we also fry up some thick-cut bacon, saute some stuffing veggie staples like onion and celery, and get our cranberries ready to go for mixing. Once the bread cools, it gets crumbled, mixed together with our add-ons and some high quality broth, then baked AGAIN for the perfect crust. While the stuffing is baking, make sure to prepare the honey butter pecans, which make this dish so unique! Your guests will LOVE this Bacon Cranberry Cornbread Stuffing as the PERFECT spin on tradition, while still being the side dish you know and love. If you’re looking to offer a variety of choices for your stuffing option, don’t miss these other Fed + Fit favorites like our Old-Fashioned Gluten-Free Stuffing, or our Sweet Potato Cranberry Stuffing (totally grain-free). So many options for your family table, we can’t wait to see what you go with! 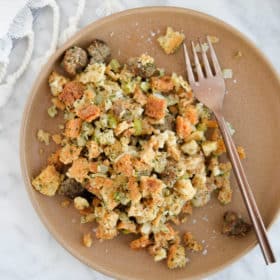 More Of Our Favorites Shop Now 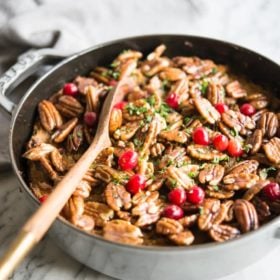 For the honey butter pecans:

**To save on dishes, your cornbread, bacon, veggies, and finished stuffing mixture can all be cooked in the same dish –  we love time savers!**
Meet the Author