Whipped Coffee: How to Make It + 15 Variations

Whipped Coffee: an EASY, at-home whipped coffee that feels a lot fancier than it is. This drink is taking the food and social media world by storm and, as coffee lovers, we are here for it! 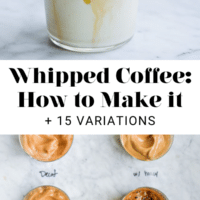 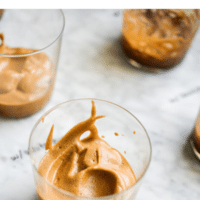 After seeing dalgona coffee, AKA whipped coffee, all over the internet, we of course had to jump in and try it ourselves! After a few sips, we were hooked – but also curious about how we could make it even better – and more accessible to folks who might not have the key ingredients on hand. 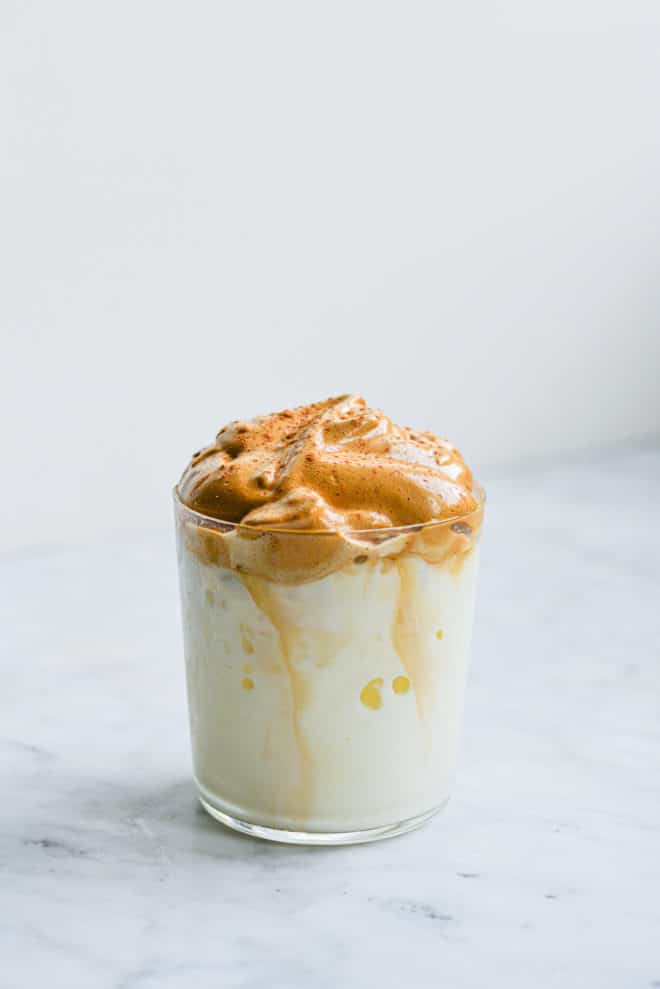 While the dalgona coffee recipe at its core is super simple (water, coffee, and sugar), we’ve spent days in the kitchen whipping up (quite literally) as many variations of those three ingredients as we could think of, and we’re here to share our findings and answer all of the “Will it work with [insert type of coffee/sugar here]?” questions that you have!

We've had a ton of questions come in throughout our dalgona coffee testing process, here are some of the most common ones! 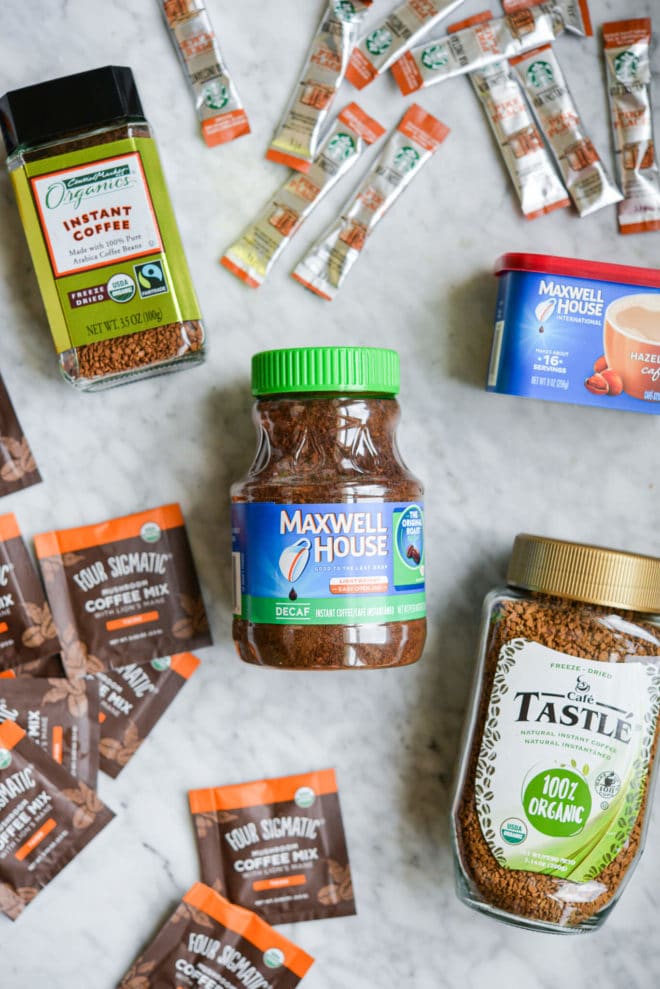 What is whipped coffee?

Simply put, whipped coffee is equal parts instant coffee, sugar, and water, whipped (either by hand with a whisk or with an electric hand mixer) and dolloped overtop milk of your choice. You can enjoy it hot (just steam your milk) or cold (add some crushed ice to your milk), and with several different sweeteners (see below).

Where does dalgona coffee come from?

First thing’s first: where did this coffee come from, and why is it all of a sudden so popular?! Long story short, it isn’t new, even if this is the first you’re hearing of it. Whipped coffee has roots in India, Pakistan, Macau, and Greece, though under a different name in each location. Whipped coffee, pheti hui coffee, Greek frappe, beaten coffee, and dalgona coffee are all names that describe this frothy concoction (though each region’s exact method/recipe varies just a bit). So, if it isn’t new, why is it surging in popularity now? WELL, in January of this year, an episode of a Korean show (called Pyunstorang), in which actor Jung Il-Woo traveled to Macau, happened upon the whipped coffee, tried it, and gave it the nickname “dalgona” (because it reminded him of a Korean toffee-like candy with the same name) aired on TV, and the rest will go down in quarantine history!

How is whipped coffee different from a Greek frappe?

Greek frappe, another whipped coffee concoction, is super similar to Dalgona coffee and actually dates back to 1957 Greece. Dimitris Vakondios, a Nescafe representative, was at the International Trade Fair in the Greek city of Thessaloniki and accidentally created the drink by mixing coffee + water in a shaker. What a happy accident! The biggest differences between a Greek frappe and Dalgona coffee are the milk base and the amount of water used. While Dalgona coffee calls for equal parts water, instant coffee, and sugar whipped and poured over milk, Greek frappes are made with cold water + ice poured into the finished instant coffee, sugar, water whip with an optional splash of milk to finish.

Who gets the credit for creating whipped coffee?

It’s hard to say! This frothy coffee concoction has been enjoyed in Greece, India, Pakistan, and Macau (among others, we’re sure) for a long time. We know it dates back to at least 1957 Greece, but it may have been around before then! We give credit for the dalgona coffee version to Macau (where Jung Il-Woo tried it) and South Korea for airing it on TV. TikTok and the rest of the social media realm get some credit for the quick spread of intrigue. Lastly, we’ve got to give a little bit of credit to the quarantine - when else would people from all over the world take the time to experiment + share this whipped creation?! We feel a little bit like Oprah here, but we’re handing out a bit of credit to everyone!

What is the best way to drink whipped coffee?

Once you’ve achieved that perfect fluffy whip, dollop it on top of a glass of crushed ice + milk. We’ve found that about 1 cup of crushed ice and 1 cup of milk (ANY milk works...use your favorite!) makes for the perfect, not-too-strong whipped coffee. Give your coffee a good stir (stirring together the whip + milk) before drinking! If you feel like your coffee is too strong, don’t be afraid to add more milk!

Can you use regular coffee for whipped coffee?

Unfortunately, no. We tried every which way to get regular coffee to froth up like instant does, but didn't have any luck. If you want to make whipped coffee, instant is your best bet!

Does it save well for later?

Surprisingly, it does! It’ll need to be stored in an airtight container in the fridge, and will last for about 2 days. This worked best with white sugar, maple syrup, or honey. Feel free to triple the recipe to save some time each morning. We recommend making your triple-batch of whipped coffee in a 12-ounce mason jar, using a third of the whip for your morning coffee, and then throwing the lid on the mason jar and sticking it in the fridge. That way, you don’t have to transfer it from bowl to airtight container (although you totally can). Do note that your saved whip may separate a little bit (the coffee “water” will pool at the bottom of the fluff), but if you give it a stir, it will come back together 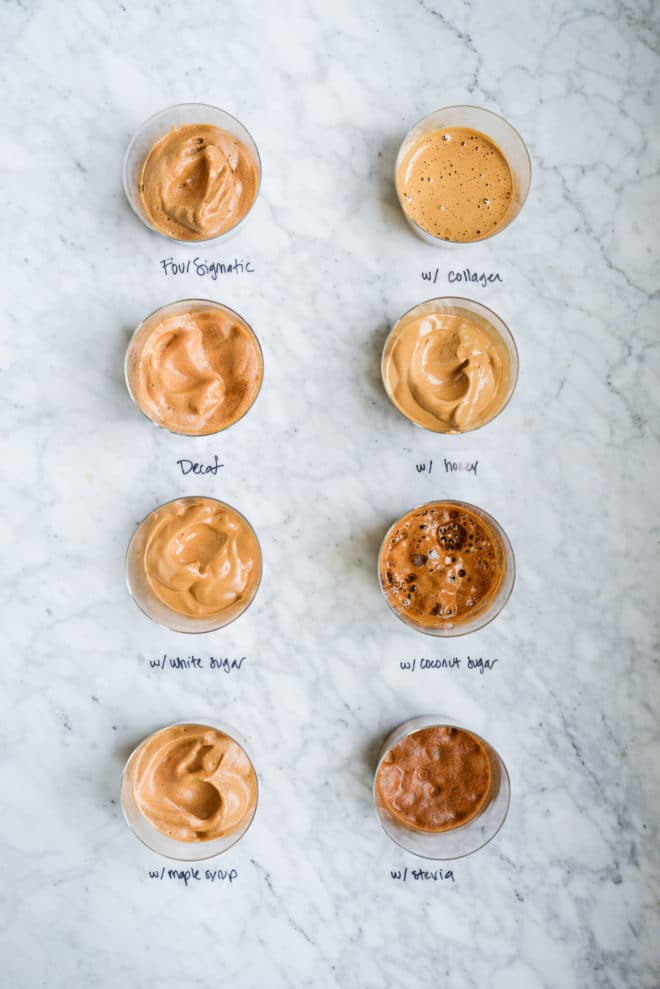 We tested instant coffee, PLUS 7 other coffee options, each with granulated sugar, coconut sugar, honey, maple syrup, stevia, monk fruit sweetener, and no sweetener at all. To keep things consistent, we used an electric hand-mixer for exactly 2 minutes for each of the trials.

What types of coffee work best?

Our basic formula was 2 teaspoons instant coffee + 2 teaspoons granulated sugar OR 1 ½ teaspoons liquid sweetener + 2 teaspoons boiling water. Below you'll find a comparison chart for all of the coffee types we tried!

We found that matcha won't whip on its own when combined with water and sugar. For whipped matcha, you’ll need to either whip 2 tablespoons of aquafaba (liquid from a can of chickpeas) OR one egg white until frothy, then add the sugar (2 teaspoons) and whip until stiff. Whisk the matcha powder in until incorporated and dollop over iced milk!

What types of sweetener work best?

Once we nailed down what types of coffee work best, we also wanted to try different sweeteners! Below is a comparison of every sweetener type. 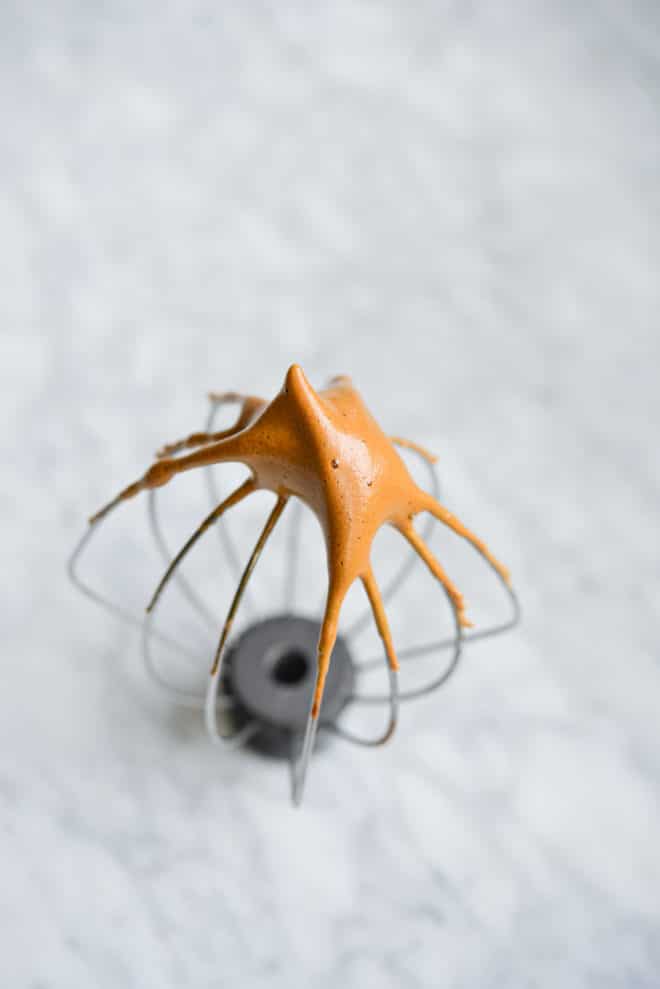 What is the best whipping method?

Lastly, in our pursuit to be as thorough as possible, we tested three different tools for whipping: a hand whisk, a milk frother, and an electric hand mixer. Don’t give up if you aren’t getting fluff! If you hit the 5 minute mark (after high-speed consistent mixing/whisking), then there could be an unseen variable at play: altitude, temperature, or age of the sugar or coffee. Below you'll find our test results!

Here are our take-aways from our whipped coffee tests:

What is the best way to make whipped coffee? 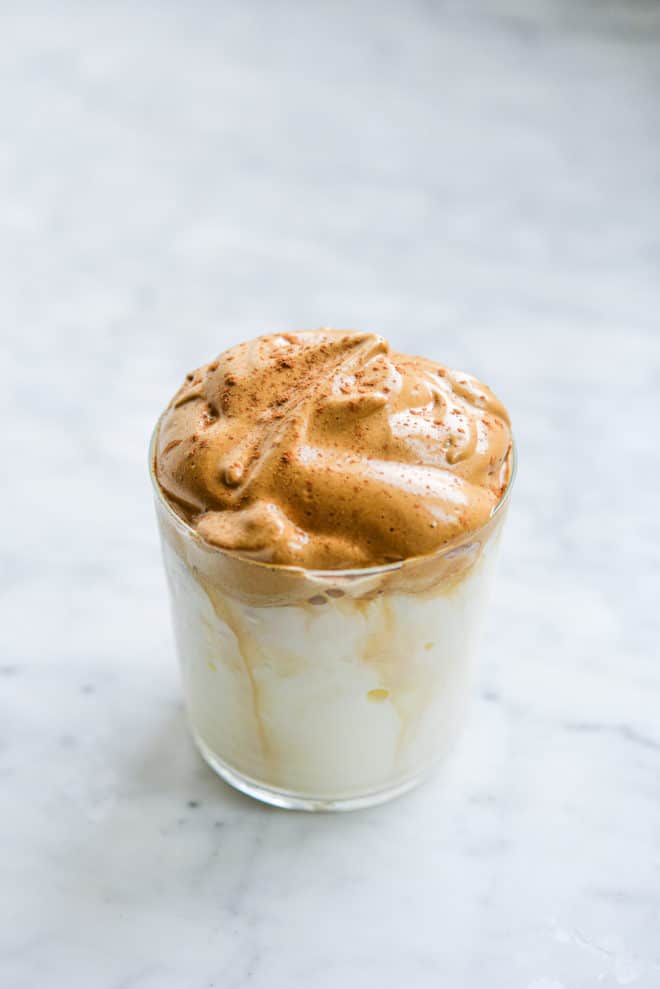 After making about 200 cups of Dalgona coffee collectively, we’ve decided that this combination is the winner:

Mix the instant coffee, maple syrup, and hot water with a hand mixer for 3 full minutes, then spoon over 1 cup crushed ice + 1 cup whole organic GF milk. Give it a good stir and enjoy with a metal reusable straw!

Finally, here are a few tips to solve some common dalgona coffee problems!

For all the dalgona coffee newbies, we hope that we took out the guesswork for you! If you’re a whipped coffee pro, let us know how you make it, and your favorite combination of coffee + sweetener below! Novice, pro, or anywhere in between, we hope you enjoy your at-home brew!