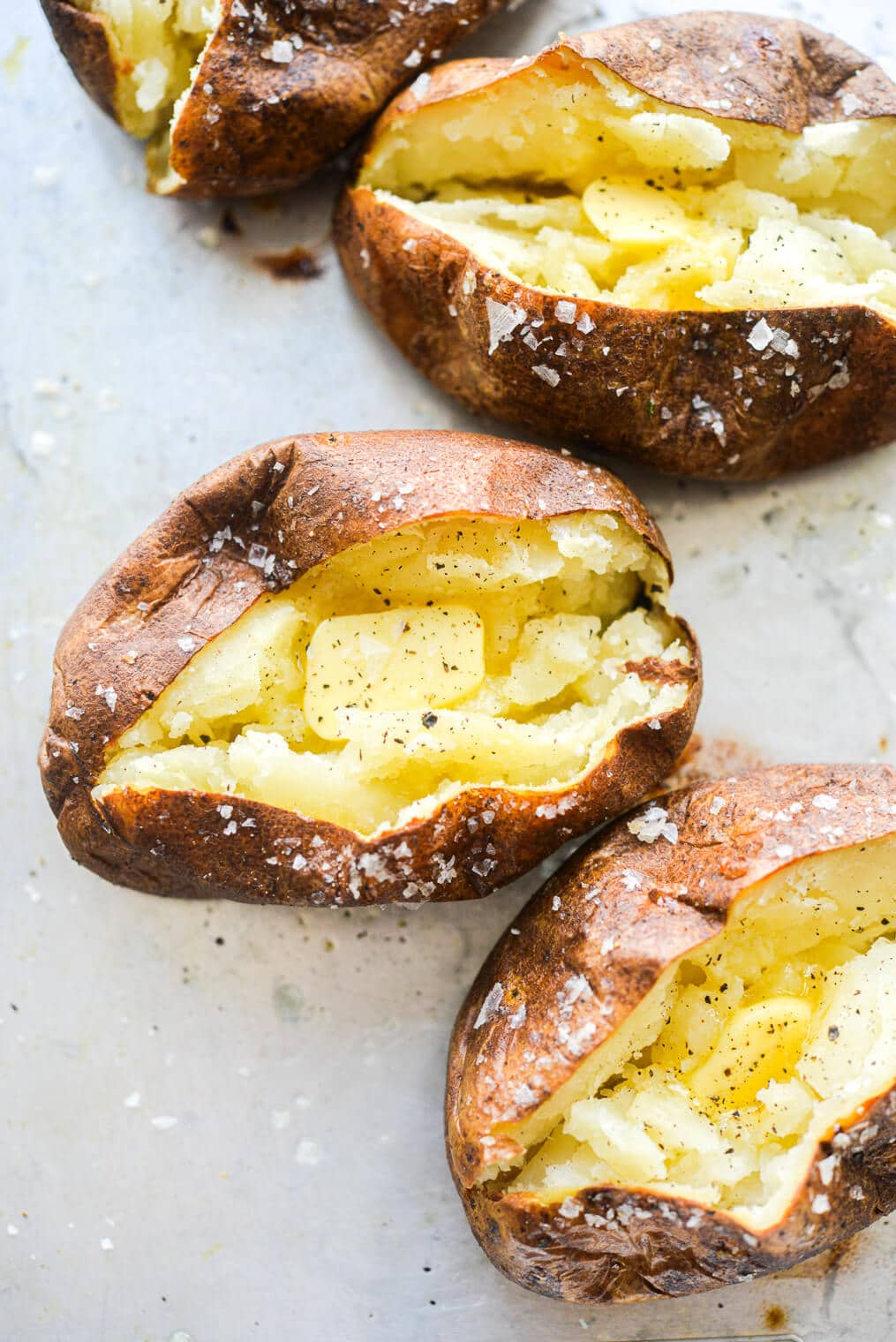 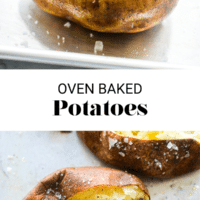 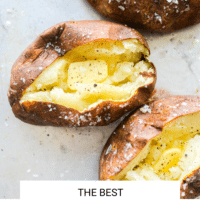 With perfectly salty, crispy skin and a fluffy, perfectly-cooked inside, these oven baked potatoes are delicious with just a little bit of butter or loaded up with toppings galore!

While this may seem like a really basic recipe (because it is!), we can honestly say that we’re confident that this is the best oven-baked potato recipe you’ll come across. Here’s why:

Here’s what you’ll need to make the crispy, delicious baked potatoes in the oven:

How to Cook Baked Potatoes in the Oven

If you can remember these 4 words — preheat, rub, sprinkle, bake — you can bake the best potato EVER! Here’s exactly how you’ll do it: 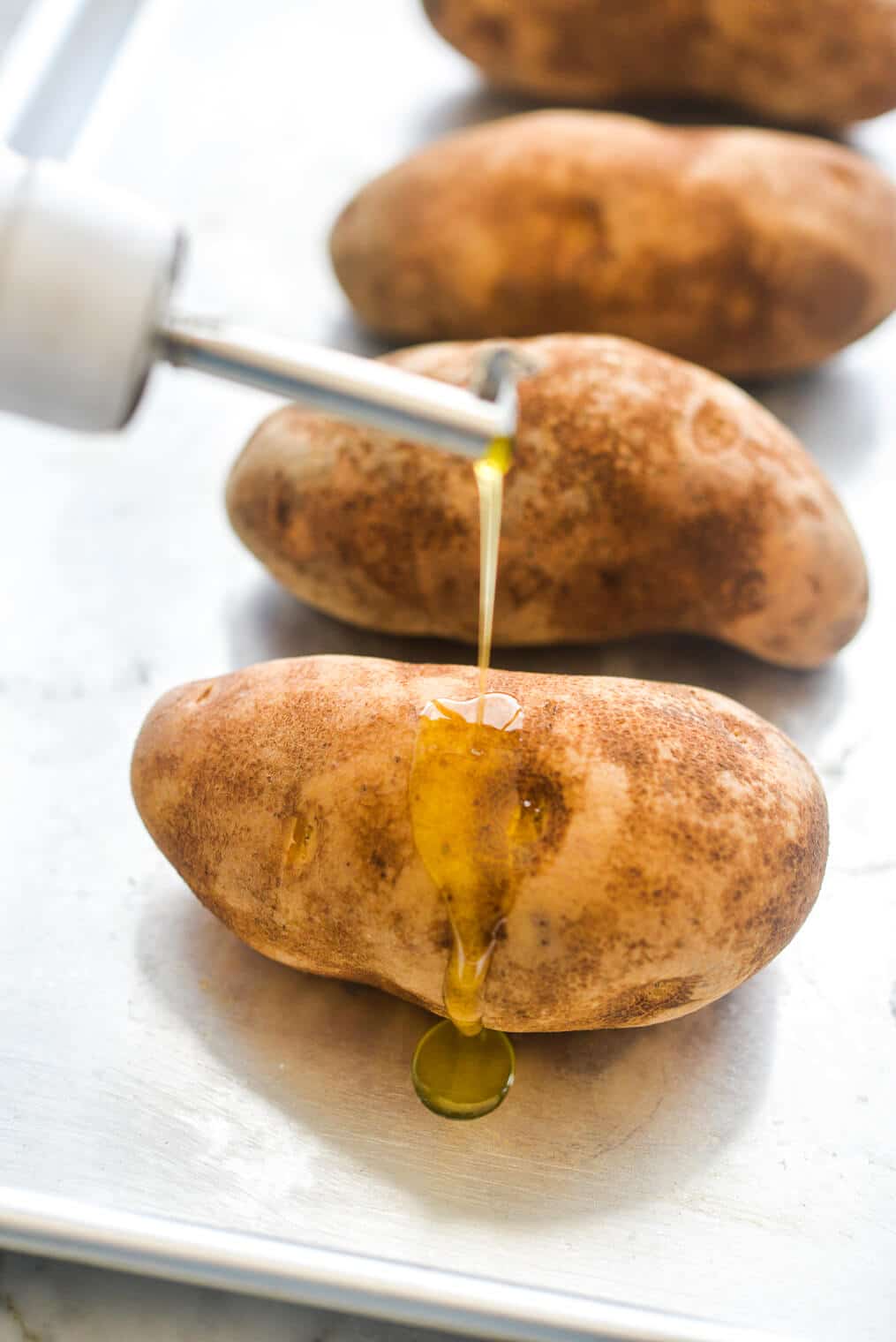 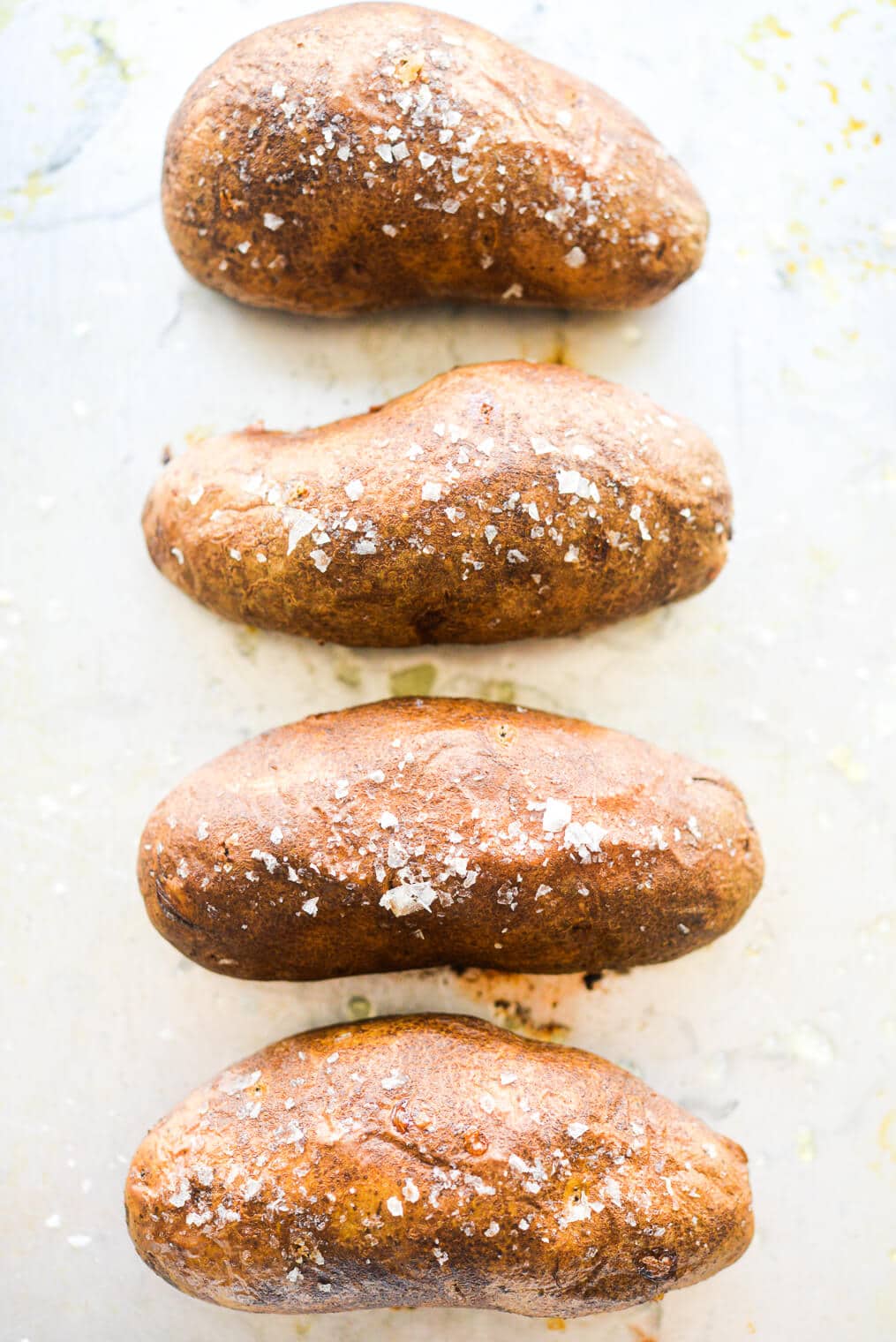 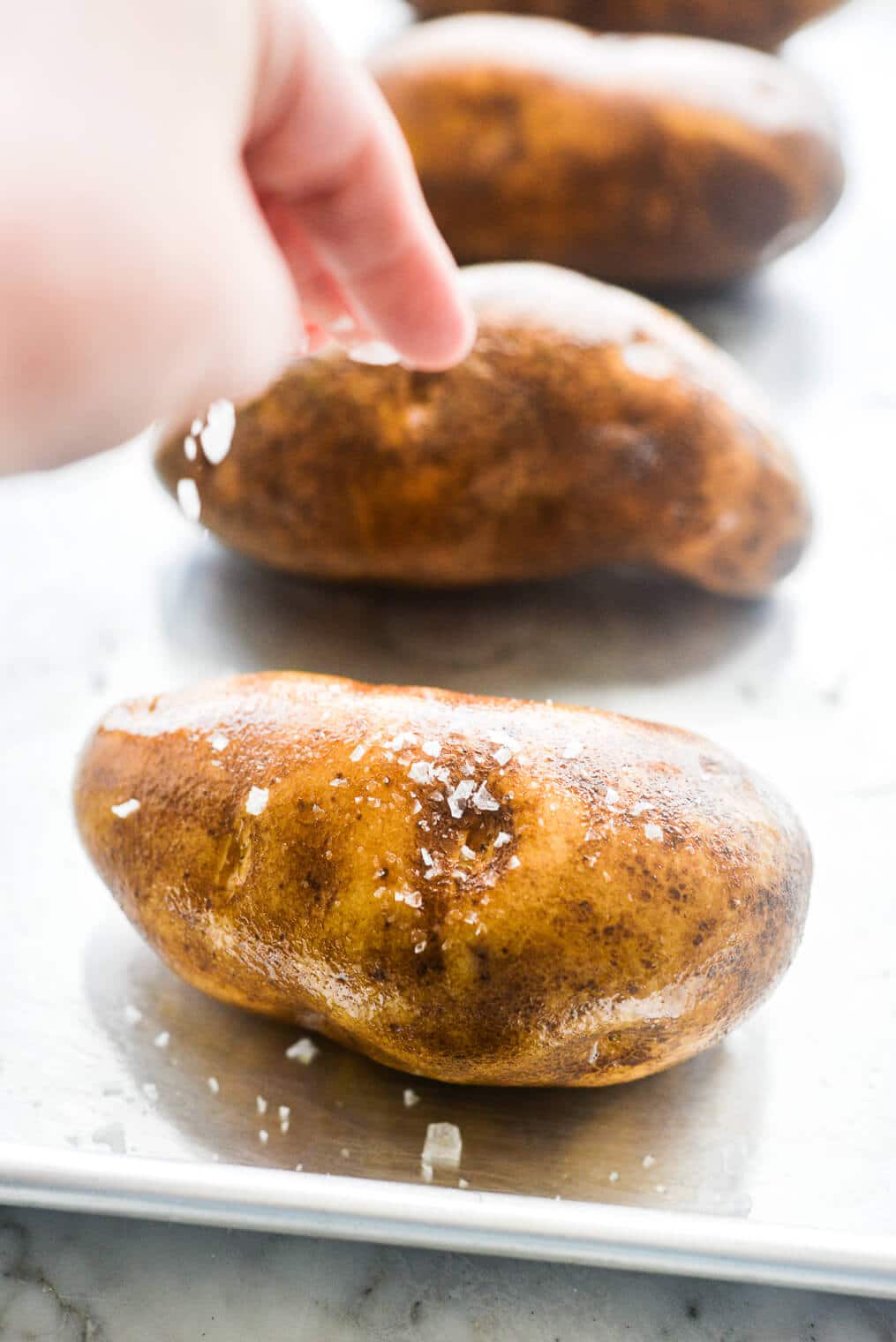 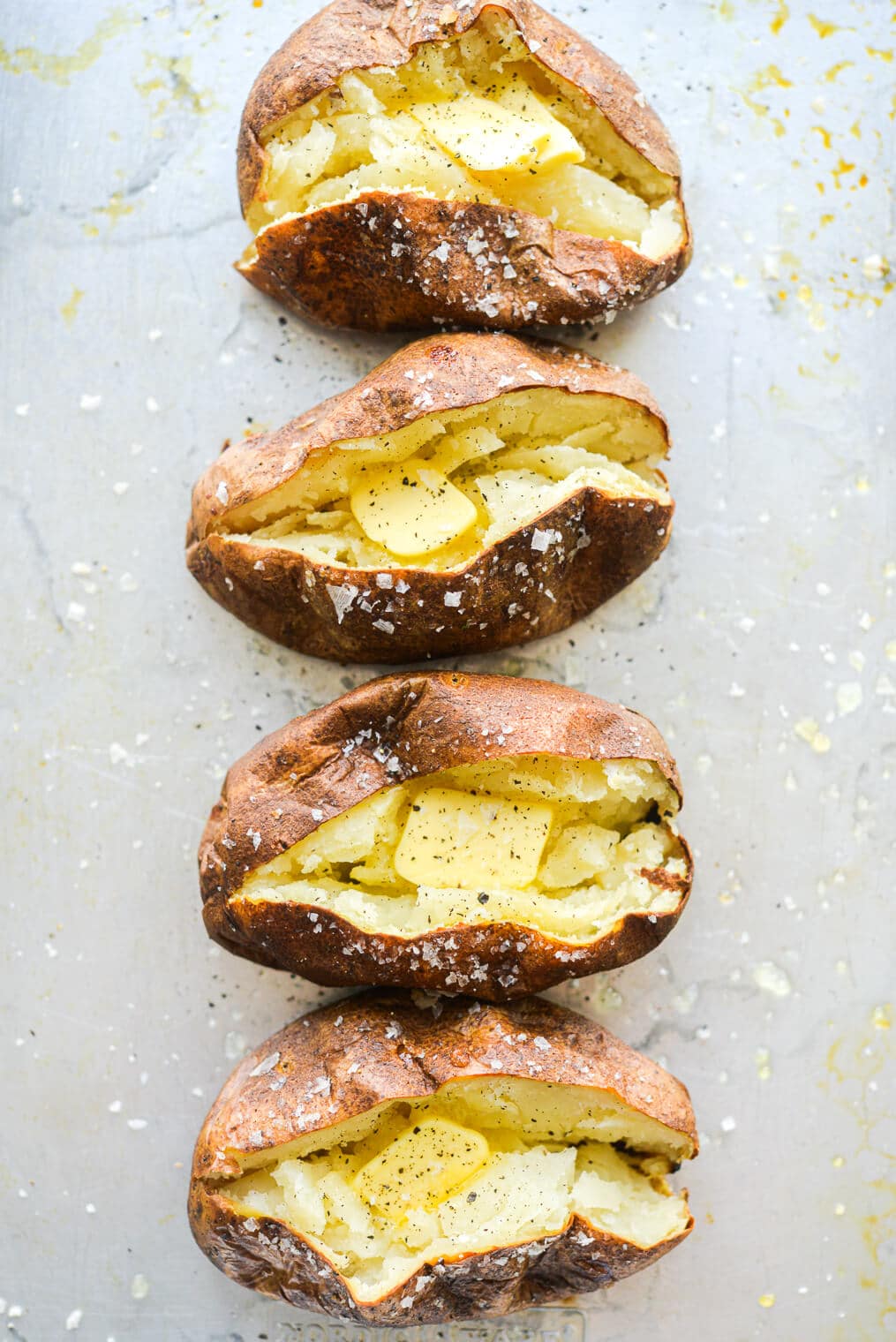 What temperature do you bake potatoes at?

Do you poke holes in potatoes before baking?

We actually don’t poke holes in our potatoes before baking! It is said that poking holes in the potato allows steam to escape the potato so it doesn’t explode, but in reality, steam is actually able to escape from the skin (and we’ve never experienced a potato explosion!). If you’re firmly team holes, though, it won’t hurt anything to poke a few to give you peace of mind.

How long does it take to make crispy oven baked potatoes?

To be honest, kind of a long time: 60-75 minutes. That’s the ONLY drawback of baked potatoes (for me, at least). This is one of those starchy sides that’s super simple and hands-off but does take some planning because of the amount of time it takes.

Why do they put salt on the outside of baked potatoes?

We salt the outside of our potatoes for a couple of reasons! First, flavor: we personally love the taste of the salty crispy skin of the potato. Second, using salt helps draw more moisture out of the potato, leading to a fluffier inside and crispier outside.

How to Bake a Potato in the Oven with Foil

We don’t actually recommend baking your potatoes in foil (the foil tends to keep the skin from crisping), but if you prefer it this way, go for it! Simply oil and salt the potato, then wrap it in foil and bake for 60 minutes at 425°F.

Is it safe to bake potatoes in aluminum foil?

Yes, it is safe, but if you are worried about your potato touching the foil, you can wrap it in parchment first, then in foil.

How do you know when baked potatoes are done?

Finished baked potatoes should be able to be easily pierced with a fork. If you’re meeting some resistance when trying to poke the potato with a fork, we’d give the potatoes a few more minutes in the oven.

What goes good on baked potatoes?

ALL THE THINGS! Baked potato bars are one of my very favorite party-worthy spreads because it allows guests to top with the exact toppings that they love. Here are some of the most classic potato toppers:

Do you eat the skin of baked potatoes?

I do! It’s totally a personal preference, though. While I absolutely love the taste and texture of crispy, salty potato skin, others (ahem, my husband!) prefer skipping the skin and enjoying the fluffy inside of the potato only.

How do you store baked potatoes?

Store any leftover baked potatoes in an airtight container in the fridge!

While this is a common (and valid) concern, we’ve never actually experienced a potato exploding in the oven (and between the 4 of us, we’ve baked a lot of potatoes!), so I wouldn’t worry too much about that happening. If it makes you nervous though, feel free to poke a few holes in your potatoes before popping them in the oven!

How do you keep potatoes from exploding in the oven?

We actually don’t do anything special to keep the potatoes from exploding in the oven. Some people prefer to poke holes in their potatoes (which is said to let the steam out of the potatoes, preventing explosion), but because we’ve never ever experienced a potato explosion, we skip that step. 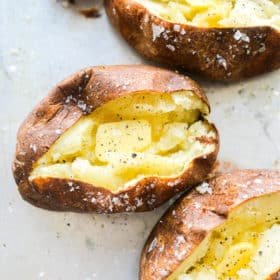 By: Cassy Joy Garcia
4 — Votes 2 votes
Print Email
Prep Time: 5 mins
Cook Time: 4 hrs 4 mins
Servings: 4 baked potatoes
These oven-baked potatoes are perfect for stuffing or for having as a simple side!

I haven't personally experienced a potato exploding while baking in the oven, but if you have (or if this is of concern to you), feel free to poke holes in your potatoes before popping them into the oven!
Meet the Author